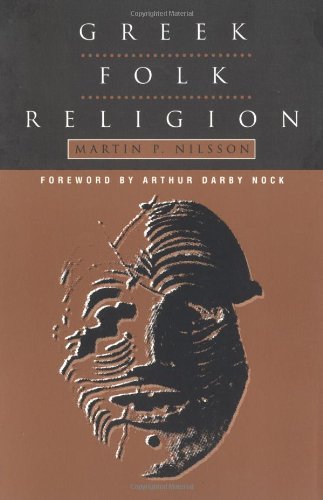 "The presentation is exceptionally vivid."-Journal of Religion "Long recognized as one of the truly great interpreters of Greek religion, Professor Nilsson has, in this volume, made a real and lasting contribution."-Morton Scott Enslin

"Long recognized as one of the truly great interpreters of Greek religion, Professor Nilsson has, in this volume, made a real and lasting contribution."--Morton Scott Enslin "In the extensive literature relating to ancient Greece, there is no work that serves the purposes of this volume. A Swedish proverb speaks of placing the church in the middle of the village, and that is precisely what Nilsson has here done. Homer and Hesiod formed the basis of the traditional education of the Greeks in general, and the great gods and goddesses as they appear in art show at all times the formative influence of the epic tradition. Nevertheless, the hard core of Greek religion is to be found in its observances: these took their shape among men whose focus was first the hearth and then the city-state, men moreover whose life and livelihood were tied to crops and herds and the annual cycle of nature."--Arthur Darby Nock, from the Foreword Martin Nilsson writes about the popular religious observances of the Greeks, as practiced both earlier in the twentieth century and in classical times, the agricultural festivals and customs, the rituals of family and society. The folk religions of Greece that underlay and continually erupted into the more "elevated" Olympian mythology of Homer and Hesiod are explained in detail by a scholar with unparalleled understanding of the rites and customs of rural life. Martin P. Nilsson was the author of several books, including History of Greek Religion and The Dionysiac Mysteries of the Hellenistic and Roman Age.