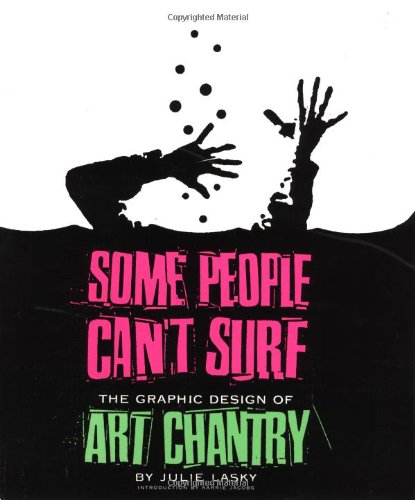 It's a little odd, and a more moving sign of aging than seeing gray hair in the mirror, to read a retrospective on the career of someone one's own age, someone with definite roots in the era of punk rock, someone so hip that just as many non-designers know his work as designers. Art Chantry is a man of many styles and all of them feel decidedly in-the-moment, some even in-you-face: the truly DIY poster for an Avengers gig in 1979, the professional yet DIY-look of Rhino Records' 1994 punk reissues, the psycho-billy of a Cramps poster or CDs for Estrus (only one of the coolest labels around) or his deliciously detailed Tool-style posters like the one from 1997 promoting condom use, where the floating cop head warns: "I take one everywhere I take my penis!" His clients have included Seattle institutions like the Bathhouse, New City, Empty Space, Organic and Repertory Theatres, the Center on Contemporary Art and the Give Peace a Dance and Hempfest benefits. In addition to Estrus and Rhino, he's also designed for Sub Pop, Chuckie-Boy and many smaller record labels like Lucky, Betty and Trash City, and created dozens and dozens of logos and type treatments, each so distinct from the others, it's as though there are just as many designers within that one person. A lot of his work uses collage; for other jobs, he's hired the best illustrators for the job (including R. Crumb, Mad Magazine's Don Martin and the late Ed "Big Daddy" Roth of Rat Fink fame). And he isn't afraid to reference vintage scinece-fiction or distressed newsprint porno ads. At 47, Chantry still speaks fluent punk. Says 30-year-old deejay Tim Kelly (WMBR), "He's got the whole retro-'60s thing down pat. The Mono Men 'Wrecker!' album is a case in point: the hot go-go girl, the sharp color contrasts--it could be a poster for some lost Russ Meyer flick. You know the Mono Men sound like a dirty garage band just by looking at the record." Author Julie Lasky's story of first meeting Chantry (in her pajamas?) is charming (but I won't ruin it for you). As she writes, "This book can only hint at the complexities of an underground-lurking, monster-loving, self-described iconoclast who has influenced legions of designers around the world while enlivening Seattle's streets." Lasky, former managing editor of Print and current editor of Interiors, is always entertaining, as is Karrie Jacobs, editor-in-chief of dwell, whose introduction admiringly recalls Chantry from her days working on Seattle's music magazine The Rocket, for which he was the on-and-off art director. Some People Can't Surf is fun to read and even more fun to look at: Chantry's designs will rattle your cage. It'll make you want to shut off the G4, grab an old pulp novel and turn up the stereo. -Communication Arts

Art Chantry's contrarian ways have placed him in the pantheon of great modern designers. Some People Can't Surf: The Graphic Design of Art Chantry is the first survey of this visual iconoclast, who also designed the book and packed it with hundreds of his vibrant images. Gritty, funny, and refreshingly low-tech, his award-winning work has promoted countless bands, social causes, and non-profits. Tracing Chantry's career from his covers and layouts for the seminal music magazine The Rocket, to album covers for such cult bands as Mudhoney, the Reverend Horton Heat, and the Fastbacks, Some People Can't Surf is a comprehensive look at his creative evolution. Complete with commentary on the unusual origins and unorthodox processes behind his work, as well as providing context for his oft-copied look, Some People Can't Surf is a much-anticipated exploration of this idiosyncratic design master.

1. Some People Can't Surf: The Graphic Design of Art Chantry

2. Some People Can't Surf: The Graphic Design of Art Chantry