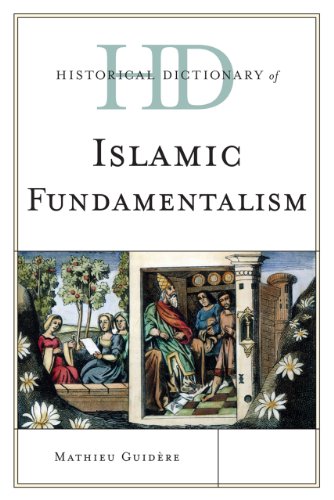 Guidere (Islamic & Middle Eastern studies, Univ. of Toulouse, France) hopes to clear up some of the misunderstanding and confusion regarding Islamic fundamentalism. His preface claims that the dictionary is "truly historical in that it starts at the beginnings and traces the religion's long and complicated trajectory up to the present day." In addition to entries on major events, people, and locations relating to Islamic fundamentalism, the dictionary also includes a map of the Islamic world, graphic organizers that chart the development of various splinter groups, a chronology, a glossary of terms translated into English, reader's notes, and a list of acronyms and abbreviations. VERDICT With its clear, concise entries and extensive extra features, this resource stands out from other material on the topic and provides a useful starting point for researchers and those who need a brief definition of a particular term. * Library Journal * The dictionary does an excellent job of presenting the diversity within Islamic fundamentalism, the complex relationship these groups have with each other, the larger Muslim world, and the non-Muslim world. The extensive bibliography is a valuable reference for those interested in more in-depth study....This dictionary is an ideal resource for advanced undergraduate courses or graduate survey courses focusing on Islamic fundamentalism. * American Reference Books Annual * The subject of Islamic fundamentalism, especially for the West, is one that is shrouded in confusion, misunderstanding, and mystery. Over the last two decades, many have attempted to lift the veil, but few have been fully successful. With this dictionary, Guidere (Univ. of Toulouse, France) offers one of the best publications currently available. It provides a comprehensive and detailed examination of Islam as a religion, Islam as a government, and Islam as a way of life. The author thoroughly investigates and analyzes the various groups, events, movements, key figures, and dogmas that have influenced contemporary Islamic fundamentalism and Islamism in general. The dictionary focuses on explaining the reasons, purposes, and developments of various fundamentalist reinterpretations of Islam and the Qur'an. The main portion of the book consists of the dictionary section, with over 500 cross-referenced alphabetical entries. The work also features a detailed chronology, introductory essay, an Arabic-to-English glossary, and an extensive bibliography. This volume is extremely user-friendly, well organized, and up-to-date. Summing Up: Highly recommended. Lower-level undergraduates and above; general readers. * CHOICE * [This] volume...is full of detailed information difficult to find in other reference books about a movement of crucial importance to world affairs, and thus it deserves a wide circulation. * Reference Reviews *

The Historical Dictionary of Islamic Fundamentalism provides a comprehensive and detailed examination into Islam as a religion, Islam as a government, and Islam as a way of life. It is a thorough analysis of various groups, events, movements, key figures, and dogmas that have influenced contemporary Islamic Fundamentalism. In this book, Dr. Guidere provides an in-depth look at Islamic Fundamentalism through a detailed chronology, an introductory essay, an Arabic-to-English glossary, and an extensive bibliography. The main portion of the book consists of the dictionary section, which has over 500 cross-referenced entries on groups, events, movements, key figures, dogmas, ideologies, and movements of the 20th and 21st centuries. This book is an excellent access point for high school students, college students, and anyone interested in a better understanding of the world of Islam.