Artículos relacionados a BENJAMIN CONSTANTS PHILOSOPHY: A Study in Politics...

BENJAMIN CONSTANTS PHILOSOPHY: A Study in Politics and Religion 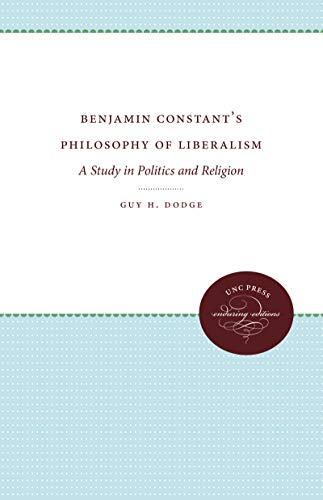 This first work in English to focus on Constant as a political theorist shows that his thinking was molded by the French Revolution of 1789 and by Napoleon's regime. Constant is identified as the first to recognize Bonapartism as a new form of despotism, arising from the theory of popular sovereignty, which is still the basis for modern Fascist and Communist regimes. His political thought is analyzed within the framework of his philosophy of history, law, ethics, and religion. Originally published in 1980. A UNC Press Enduring Edition -- UNC Press Enduring Editions use the latest in digital technology to make available again books from our distinguished backlist that were previously out of print. These editions are published unaltered from the original, and are presented in affordable paperback formats, bringing readers both historical and cultural value.

1. Benjamin Constant's Philosophy of Liberalism : A Study in Politics and Religion