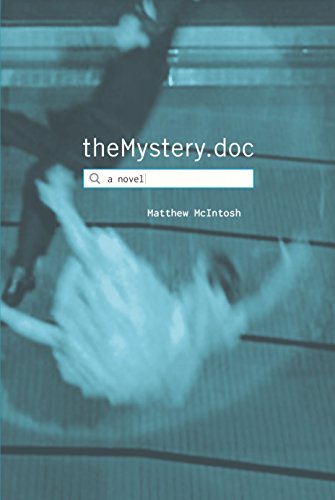 An Amazon Best Book of the Year (Mysteries and Thrillers)

"McIntosh is a slacker Proust, writing about the underclass of Spokane rather than the upper classes of Paris as he attempts to convert memories and experience into art . . . Art installation, performance piece, vision board: These are odd ways to describe a novel, but McIntosh clearly wants to update that old genre, to give it a postmodern makeover . . . At a time when most novels still resemble their Victorian forebears, it's refreshing to encounter a novel that actually looks like a 21st-century production . . . a remarkable achievement."--Steven Moore, Washington Post

"Perhaps the most useful way to think about theMystery.doc is as an experiential novel, one we live with (or through), rather than read . . . At the same time, it is surprisingly accessible for such a long book: not a critique of meaning so much as an evocation of meaning's aftermath--an expression, in other words, of the chaotic culture in which we live . . . [McIntosh's] predecessors include James Joyce, Marguerite Young, Thomas Pynchon, David Foster Wallace, William T. Vollmann, Karl Ove Knausgaard . . . It may seem strange to call a 1,660-page novel intimate, and yet this is what McIntosh is after, to mine the depths of a particular set of points of view."--David L. Ulin, 4Columns

"The rhythm of reading it is a staccato beat, with occasional pauses to refresh. The book simulates the act of trying to read a book in 2017: readers are continually 'distracted' with text messages and digital alerts and bizarre images . . . More than just an amnesia thriller, it's a story of a narrative trying to will itself to life . . . [a] big, ambitious novel that is actively trying to eat the world."--Paul Constant, The Seattle Review of Books

"[W]ith his 1,600-page follow-up to 2003's Well, [McIntosh] has sneakily mirrored our fragmented culture by cobbling together a miscellany of phone transcripts, lecture fragments, photos, blank pages, and a loose narrative about a writer trying to produce a literary masterpiece."--Week

"McIntosh is one of the few who has successfully captured in print the shifting sands of the way we communicate today . . . a young visionary."--Tom Mayer, Mountain Times

"McIntosh's second book (after Well) is fourteen years in the making, an audacious, sprawling, messy, and aptly titled antinovel that rarely subscribes to a conventional narrative format. The volume is comprised largely of fragments of miscellaneous, seemingly arbitrary exchanges and entries from digital and analog sources, including emails and chats, voice and video recordings, photographs, film stills, lines of computer code, typographical symbols . . . A strange and unclassifiable work, which brings to mind visually stimulating projects like Mark Z. Danielewski's House of Leaves. It will certainly find a following among fans of literary puzzles."--Publishers Weekly

"This will get discussed as a big book--check out the page count."--Library Journal

"Glued precariously together from the documentary fragments of a shattered culture and a fractured psyche, as with Eliot's The Waste Land, Matthew McIntosh's huge and riveting theMystery.doc stakes out its territory in the unbroken ground of a new and unsettling American century. Haunted the same way that contemporary life is haunted--by snapshots and forgotten emails; scraps of dialogue and movie stills--this brave and massively accomplished book is both a savage exorcism and a dazzling celebration of the novel and the human heart, each with their endless possibilities. A transfixing statement in a shimmering new language."--Alan Moore, author of Jerusalem

"theMystery.doc may seem capacious but is actually sly, shy, and precise, and Matthew McIntosh is ambitious in the good sense: he attempts something new, with new vitality, and at that, absolutely succeeds."--Rachel Kushner, author of The Flamethrowers and Telex from Cuba

With praise from Alan Moore and Rachel Kushner, a groundbreaking novel told in an exciting new form, mixing fiction, memoir, prose poetry, and textual art, exploring birth, death, the Internet, and the writing life as they play out in contemporary America and telling the story of a man who wakes up one morning not knowing who he is

Funny, highly inventive, and deeply moving, theMystery.doc is a vast, shapeshifting literary novel that reads like a page-turner. It’s a comedy, a tragedy, a big book about America. It’s unlike anything you’ve read before.

Rooted in the western United States in the decade post-9/11, the book follows a young writer and his wife as he attempts to write the follow-up to his first novel, searching for a form that will express the world as it has become, even as it continually shifts all around him. Pop-up ads, search results, web chats, snippets of conversation, lines of code, and film and television stills mix with alchemical manuscripts, classical works of literature—and the story of a man who wakes up one morning without any memory of who he is, his only clue a single blank document on his computer called themystery.doc. From text messages to The Divine Comedy, first love to artificial intelligence, the book explores what makes us human—the stories we tell, the memories we hold on to, the memories we lose—and the relationships that give our lives meaning.

Part love story, part memoir, part documentary, part existential whodunit, theMystery.doc is a modern epic about the quest to find something lasting in a world where everything—and everyone—is in danger of slipping away.