ArtÚculos relacionados a The Venetian Money Market: Banks, Panics, and the Public...

The Venetian Money Market: Banks, Panics, and the Public Debt, 1200-1500 (Money and Banking in Medieval and Renaissance Venice, Vol 2) 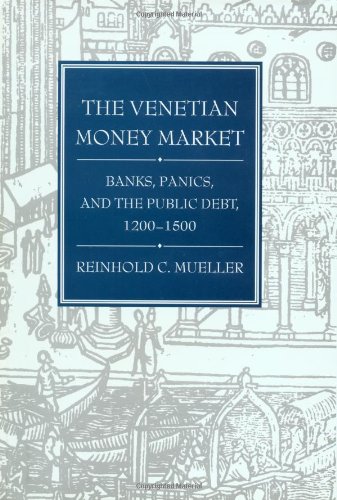 "This is the kind of book that is all too rare in modern historical scholarship. It is at once meticulously researched, granitically organized, perceptively argued, and eminently readable. The last is no mean achievement when one considers the subject matter. Banks, investments, credit, and debt may be important for our understanding of medieval and Renaissance Italy, but as anyone who has balanced a checkbook or read an annuity report can attest, it can all be dreadfully boring. Not so here." -- Thomas FMadden, Sixteenth Century Journal

"This volume is an outstanding example of meticulous, readable, wide-ranging scholarship... [It] is careful... brilliant study." -- John E. Dotson, Speculum

"This book is a mine of information and a most reliable guide to the Venetian Money Market. For many years to come it will constitute an essential tool for an serious study related to the history of Venice and its economy." -- Benjamin Arbel, Mediterranean Historical Review

In 1985, Frederic C. Lane and Reinhold C. Mueller published the magisterial Money and Banking in Medieval and Renaissance Venice, Volume 1: Coins and Moneys of Account. Now, after ten years of further research and writing, Reinhold Mueller completes the work that he and the late Frederic Lane began.

The history of money and banking in Venice is crucial to an understanding of European economic history. Because of its strategic location between East and West, Venice rapidly rose to a position of preeminence in Mediterranean trade. To keep trade moving and credit available from London to Constantinople and beyond, Venetian merchants and bankers created specialized financial institutions to serve private entrepreneurs and public administrators: deposit banks, foreign exchange banks, the grain office, and a bureau of the public debt. This new volume clarifies Venice's pivotal role in Italian and international banking and finance. It also sets banking--and panics--in the context of more generalized and recurrent crises involving territorial wars, competition for markets, and debates over interest rates and the question of usury.

"The single aspect that most characterizes Venetian history and historiography is the dominant role of the state in the life of the city and the symbiosis between public and private sectors of the economy, between public and private interests....A primary concern of civil authorities was to create an atmosphere of competitive opportunity on the Rialto conducive to investment, that is, to the influx of money and goods, their turnover in Venice, and their eventual outflow."--From The Venetian Money Market

1. The Venetian Money Market: Banks, Panics, and the Public Debt, 1200-1500 (Money and Banking in Medieval and Renaissance Venice, Vol 2)

2. The Venetian Money Market: Banks, Panics, and the Public Debt, 1200-1500 (Money and Banking in Medieval and Renaissance Venice, Vol 2)

Descripciµn The Johns Hopkins University Press, 1997. Hardcover. Condiciµn: GOOD. Has little wear to the cover and pages. Contains some markings such as highlighting and writing. Supplemental materials are not guaranteed with any used book purchases. N¤ de ref. del artÚculo: 0801854377_abe_gd

3. The Venetian Money Market: Banks, Panics, and the Public Debt, 1200-1500 (Money and Banking in Medieval and Renaissance Venice, Vol 2)

Descripciµn The Johns Hopkins University Press, 1997. Condiciµn: Good. A+ Customer service! Satisfaction Guaranteed! Book is in Used-Good condition. Pages and cover are clean and intact. Used items may not include supplementary materials such as CDs or access codes. May show signs of minor shelf wear and contain limited notes and highlighting. N¤ de ref. del artÚculo: 0801854377-2-4

Descripciµn Johns Hopkins University Press 1997-06-01, 1997. Hardcover. Condiciµn: Good. No Jacket. Item is in good condition. Some moderate creases and wear. This item may not come with CDs or additional parts including access codes for textbooks. This may not have a dust jacket. Might be an ex-library copy and contain writing/highlighting. Photos are stock pictures and not of the actual item. N¤ de ref. del artÚculo: DS-0801854377-3