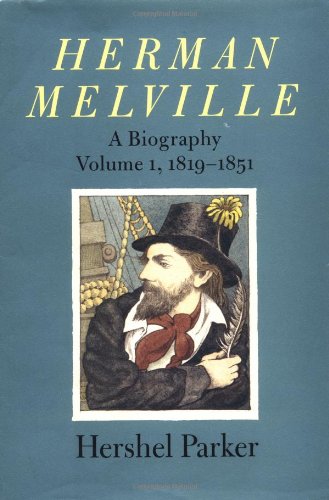 "Professor Parker... is a sound, sensible biographer and so thorough that he will probably be accused of monumentality -- translation: unnecessary detail, such as which cousins attended whose wedding. The charge is not deserved. The detail matters... Professor Parker has had a vast amount of material to work with and has made good use of it. His life of Melville, which hurried readers may find over-inclusive, becomes a history of manners, amusements, business methods, politics, American whaling and international maneuverings in the South Seas, literary cliques, publishing practices, copyright law, and the erratic eccentricities of reviewers. When possible -- and it frequently is -- such information is presented with sly, deadpan humor. Melville emerges from this background as a man living and working in a real world full of real, amusing, brilliant, and sometimes rascally people. Well-chosen quotations establish that Melville himself was a charmer, a grand yarn-spinner, a wild driver, and a man who could describe a winter gale in the Berkshires as indicating 'too much sail on the house' and a need to 'go on the roof & rig in the chimney.' He was also, of course, a serious writer, steadily expanding his range and his thinking, and on the way to becoming the great writer who deserves all of Professor Parker's admirable work and all of a reader's attention." -- Phoebe-Lou Adams, Atlantic Monthly

"One of the most complete and staggeringly researched biographies of an American novelist ever published; it will certainly remain the undisputed standard Melville biography for many years to come... Parker's book does a fine job of bringing Melville's life up to date in the light of recent scholarship, as well as reinvigorating modern interest in a true American original." -- Scott Bradfield, Times Higher Education Supplement

"The linking of so much material into a continually engaging narrative is a magnificent achievement... Hershel Parker's magnum opus is a magisterial work of retrieval and unflagging scholarship, whose sheer diversity of detail adds human complexity to what earlier often seemed no more than an inert chronicle. It caps all previous endeavors. Whatever new discoveries are made (and there may be some surprises yet) will have to be built on his meticulous groundwork. He not only clarifies all known facts but demythologizes the fiction." -- Harold Beaver, Times Literary Supplement

"Wonderful... Parker's study is an awesome achievement, indispensable for all serious Melvillians, with the vividness of a great Victorian novel and the precision of the finest historical scholarship." -- Robert Faggen, Los Angeles Times Book Review

"Magisterial is the only word that adequately describes Hershel Parker's huge 940-page biography of Herman Melville... This detailed first installment incorporates many recently discovered manuscripts that allow the author to expand some events in Melville's life and offer several new episodes. Mr. Parker's investigation of Melville's complicated personality, his explanation of Melville's development as an artist, and his account of Melville's time are so complete that it would be impossible even to suggest the themes that run through this closely printed book. Certain to become the standard, and probably a classic." -- Lee Milazzo, Dallas Morning News

"Casts every earlier biography into shadows... Parker uses volumes of new information to give us a highly detailed, beautifully written, and moving portrait of a great writer." -- Library Journal (starred review)

"Monumental and meticulous, anchored in three decades of exhaustive research... Parker details how Melville lived and behaved as a complex human being, by turns flawed and brilliant, restless and focused... Parker's benchmark biography is also fascinating social history... The high point of Parker's first volume is his reconstruction of the Berkshire events of 1850-1851: Melville's meeting with Hawthorne, his impulsive buying of the 160-acre Brewster farm in Pittsfield, and the powerful letters and impressions shared by Melville and Sophia and Nathaniel Hawthorne... Parker discovered that the two authors had a private dinner at a Lenox hotel, where Melville proudly handed his mentor a personal copy of the new novel, famously dedicated to Hawthorne's American 'genius.' It was the happiest event in Melville's life -- and one of the most meaningful moments in American literary history. Parker makes it ours." -- R. Bruce Bickley, Jr., American Literature

"As this first of a projected two-volume biography makes abundantly clear, Melville's life is above all else an enthralling tale of literary genius in the act of self-creation. Hershel Parker is a scholar of notable fastidiousness, and his achievement here is to establish Herman Melville's life as one of the great literary family sagas of the nineteenth century -- a narrative at least as colorful and incident-rich as anything published by Melville himself." -- Literary Review

"The great merit of this biography is that its exhaustive research yields a wealth of fresh information about Melville's life. Parker gives us Melville at ground level." -- David S. Reynolds, Journal of American History

Having left most of Moby-Dick with a printer in 1851, Herman Melville lamented to Nathaniel Hawthorne that he would go down in history as a "man who lived among the cannibals!" Until his death in 1891, Melville was known as the author of Typee (1846) and Omoo (1847) -- both semiautobiographical travel books, and literary sensations because of Melville's sensual description of the South Sea islanders. (A transatlantic furor raged over whether the books were fact or fiction.) His most famous character was Fayaway -- not Captain Ahab, not the White Whale, not Bartleby, and definitely not Billy Budd, whose story remained unpublished until 1924.

Herman Melville, 1819-1851 is the first of a two-volume project constituting the fullest biography of Melville ever published. Hershel Parker, co-editor of the Northwestern-Newberry Edition of The Writings of Herman Melville, reveals with extraordinary precision the twisted turmoil of Melville's life, beginning with his Manhattan boyhood where, surrounded by tokens of heroic ancestors, he witnessed his father's dissipation of two family fortunes. Having attended the best Manhattan boys' schools, Herman was withdrawn from classes at the Albany Academy at age 12, shortly after his father's death. Outwardly docile, inwardly rebellious, he worked where his family put him -- in a bank, in his brother's fur store -- until, at age 21, he escaped his responsibilities to his impoverished mother and his six siblings and sailed to the Pacific as a whaleman.

A year and a half after his return, Melville was a famous author, thanks to the efforts of his older brother in finding publishers. Three years later he was married, the man of the family, a New Yorker -- and still not equipped to do the responsible thing: write more books in the vein that had proven so popular. After the disappointing failure of Mardi, which he had hoped would prove him a literary genius, Melville wrote two more saleable books in four months -- Redburn and White-Jacket. Early in 1850 he began work on Moby-Dick. Moving to a farmhouse in the Berkshires, he finished the book with majestic companions -- Hawthorne a few miles to the south, and Mount Greylock looming to the north. Before he completed the book he made the most reckless gamble of his life, borrowing left and right (like his wastrel patrician father), sure that a book so great would outsell even Typee.

Melville lovers have known Hershel Parker as a newsbringer -- from the shocking false report headlined "Herman Melville Crazy" to the tantalizing title of Melville's lost novel, The Isle of the Cross. Carrying on the late Jay Leyda's The Melville Log, Parker in the last decade has transcribed thousands of new documents into what will be published as the multi-volume Leyda-Parker The New Melville Log. Now, exploring the psychological narrative implicit in that mass of documents, Parker recreates episode after episode that will prove stunningly new, even to Melvilleans.