Artículos relacionados a The Transparent Society (Parallax: Re-visions of Culture...

The Transparent Society (Parallax: Re-visions of Culture and Society) 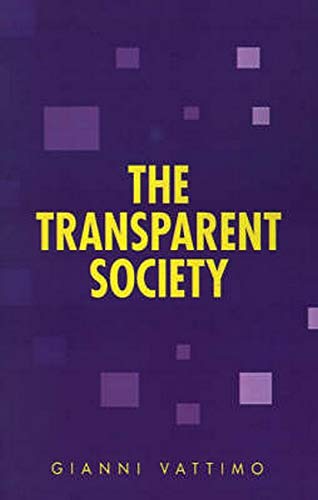 In a mere 100 pages Vattimo has managaed to tell a compelling story about how other stories about postmodernity themselves are told and retold, often in the absence of sympathetic ears. Compared to most critics writing about the subject matter, Vattimo is sophisticated and optimistic, and his story is one of hope. -- Briankle G. Chang Journal of Communication David Webb's graceful and reliable translation of Vattimo's 1989 La societa transparente (augmentented by three new chapters) makes available in English a significant account of postmodernity. -- Ronald Bogue Comparative Literature Studies

"This book is of major importance to the debate on the postmodern question." -- Jean Fran?ois Lyotard."This is Vattimo at his best -- and at his best he is very, very good, which is to say, erudite, witty, engaging, and precise. I do not think anyone comes close to Vattimo in his ability to correlate complex philosophical issues and arguments, such as those of Heidegger or Benjamin on such topics as 'the origin of the work of art' or technology and artistic production, with current social and cultural-political issues." -- Hayden White.

1. The Transparent Society (Parallax: Re-visions of Culture and Society)