Pursuit of Ecstasy: The MDMA Experience (Suny Series in New Social Studies on Alcohol and Drugs) 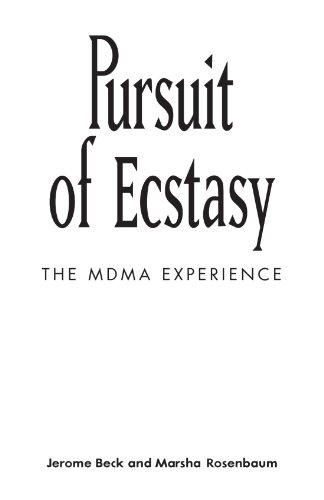 "This is the first serious study, to my knowledge, of the use and effects of MDMA in the 'real world, ' as opposed to the pharmacological laboratory. The authors have done a remarkable piece of research, tracking down users, dealers, manufacturers, and other authorities on MDMA. They have analyzed their voluminous materials judiciously and carefully, and answered all of the standard questions in this area clearly and reasonably. It is a model for a research report on a problem of this kind. It explains the questions clearly, handles alternative explanations and possible counter-arguments thoughtfully and fairly, and arrives at an overall picture of the phenomenon that will add a lot to current knowledge." -- Howard S. Becker, University of Washington

"We all live in a drug-hysterical era, in which all aspects of all (illegal) drugs are regarded as pathological. It is refreshing to encounter a study which sets aside hysterical propagandizing (which seems to be the rule these days) and adopts a level-headed, balanced description and analysis of a particular drug scene, largely from the perspective of the demonologizing and its 'insider' approach--how users see the world, especially their use of this drug--are decided pluses. This book is remarkably rich in details about the inside workings of the 'ecstasy' scene." --Erich Goode, State University of New York at Stony Brook Reseńa del editor:

The authors have produced the first "on the ground" study (not just clinical or chemical) of MDMA (3, 4-methylenedioxymethamphetamine), or "ecstasy" as it is frequently designated. A psychoactive substance related to both the amphetamines and mescaline, MDMA has become popular in recent years as one of the new "designer" drugs. First used in therapeutic treatment, its recreational or street use has increased in recent years. The authors track the efforts (with psychiatrists and researchers in opposition) of the DEA to ban the drug.

1. Pursuit of Ecstasy: The MDMA Experience (Suny Series in New Social Studies on Alcohol and Drugs)

2. Pursuit of Ecstasy - The MDMA Experience

4. Pursuit of Ecstasy: The MDMA Experience (Suny Series in New Social Studies on Alcohol and Drugs)

5. Pursuit of Ecstasy: The Mdma Experience