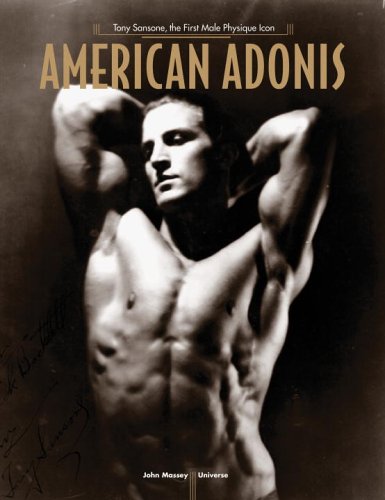 Nowadays nearly everyone is a member of a gym, and perfecting the body beautiful is taken to the point of obsession. This phenomenon can be traced back to one man: Anthony Sansone (1905-1987), the first male physique icon and the most admired bodybuilder of his time. Like his contemporary Rudolph Valentino, Sansone was one of the first to make male beauty a desirable commodity.

Images of Sansone's body spurred the physical culture movement that would sweep the country. Through innumerable reproductions of his photographs, his fitness program publications, and the three gyms he founded, Sansone set and shaped the physical ideal that a whole generation of men would follow. A charismatic figure, Sansone moved within a number of worlds and interacted with some illustrious characters: art (Gertrude Whitney), bodybuilding (Charles Atlas), dance (Alexandre Gavrilov), Hollywood (Johnny Weissmuller), theater (David Belasco), and photography (Nickolas Muray). American Adonis uncovers the lost story of Sansone's life along with stunning reproductions of his sculpted, godlike body, many of which have not been seen in more than fifty years.