Artículos relacionados a Ghost Train to the Eastern Star: On the Tracks of the...

Theroux, Paul Ghost Train to the Eastern Star: On the Tracks of the Great Railway Bazaar

Ghost Train to the Eastern Star: On the Tracks of the Great Railway Bazaar 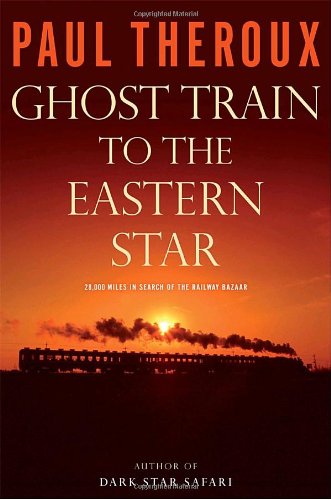 In Ghost Train to the Eastern Star, Theroux recreates an epic journey he took thirty years ago, a giant loop by train (mostly) through Eastern Europe, Turkey, the Caucasus, Central Asia, the Indian Subcontinent, China, Japan, and Siberia. In short, he traverses all of Asia top to bottom, and end to end. In the three decades since he first travelled this route, Asia has undergone phenomenal change. The Soviet Union has collapsed, China has risen, India booms, Burma slowly smothers, and Vietnam prospers despite the havoc unleashed upon it the last time Theroux passed through. He witnesses all this and more in a 25,000 mile journey, travelling as the locals do, by train, car, bus, and foot.

His odyssey takes him from Eastern Europe, still hungover from Communism, through tense but thriving Turkey, into the Caucasus, where Georgia limps back toward feudalism while its neighbour Azerbaijan revels in oil-driven capitalism. As he penetrates deeper into Asia’s heart, his encounters take on an otherworldly cast. The two chapters that follow show us Turkmenistan, a profoundly isolated society at the mercy of an almost comically egotistical dictator, and Uzbekistan, a ruthless authoritarian state. From there, he retraces his steps through India, Mayanmar, China, and Japan, providing his penetrating observations on the changes these countries have undergone.

Brilliant, caustic, and totally addictive, Ghost Train to the Eastern Star is Theroux at his very best.

Paul Theroux’s highly acclaimed books include Dark Star Safari, Riding the Iron Rooster, The Old Patagonian Express, The Elephanta Suite, and, of course, The Great Railway Bazaar. Two of his books, The Mosquito Coast and Dr. Slaughter have been made into successful films. He is a frequent contributor to magazines, including the New Yorker, Smithsonian and Men’s Journal. He divides his time between Cape Cod and Hawaii where he is a professional beekeeper.

1. Ghost Train to the Eastern Star: On the Tracks of the Great Railway Bazaar Theroux, Paul