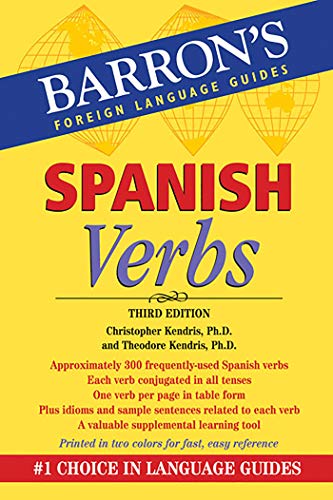 Verbs and verb conjugations are the basic building blocks when learning a foreign language. Light, compact, and easy to carry wherever students go, books in this series offer approximately 300 frequently-used verbs that are presented in easy-to-read verb conjugation tables. Each verb includes its English equivalent, sample sentences, and related words and expressions. These books also include general instruction in verb usage. Titles in Barron's Verbs series are shorter versions of Barron's 501 Verbs books. This smaller-format book is a handy reference sources for students taking Spanish, as well as for Spanish language teachers, and translators.

Dr. Christopher Kendris, an accomplished linguist, has worked as an interpreter and translator for the U.S. State Department at the American Embassy in Paris. He holds a Ph.D. from Northwestern University in Evanston, Illinois, and diplomas with " Mention Honorable " at the Universite de Paris (en Sorbonne), and at the Institut de Photetique, Paris. He is former Chairman of the Department of Foreign Languages and Supervisor of 16 foreign language teachers at Farmingdale High School, Farmingdale, NY, and has taught foreign language courses at various colleges and universities.

Dr. Theodore Kendris earned his Ph.D. at Universite Laval, Quebec City. He has taught in the Department of English and Foreign Languages at the University of St. Francis in Joliet, Illinois as well as at the Hazleton Campus of Penn State University. Dr. Kendris is the author of " Ingles completo: Repaso integral de gramatica inglesa para hispanohablantes, " published by Barron's. He is coauthor of " Spanish Fundamentals and Spanish Verb Conjugations, " also published by Barron's.

Descripción Paperback. Condición: New. 3rd. Paperback. Verbs and verb conjugations are the basic building blocks when learning a foreign language. Light, compact, and easy to carry wherever students go, books in this series offer approximately.Shipping may be from multiple locations in the US or from the UK, depending on stock availability. 360 pages. 0.308. Nş de ref. del artículo: 9780764147760