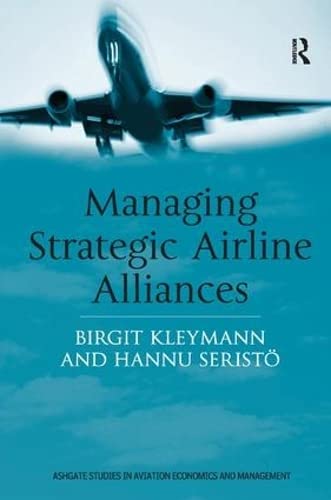 Strategic airline alliances are an important topic in airline management today, stimulated by poor access of international airlines to large domestic markets such as the USA and EU and the increasing importance of network scope. Outright mergers of international airlines have proved to be difficult for political, cultural and legal reasons, making alliances the best available form to strengthen strategic positions and streamline networks. However, there are a number of difficulties associated with an alliance such as long-term stability, political climate, cultural conflict and how much capital alliance partners should sink into the integration. The main purpose of the book is to convey in an accessible form to a wide audience, the results of recent academic research on strategic airline alliances. The authors systematically cover: policy, regulation and consumer issues; management, marketing and strategic issues; the mechanics of airline alliances; the airline alliance group as an organisation in its own right; different forms of alliances and clusters; success and failure factors of airline alliances. The book successfully: - provides an analytical framework for understanding the dynamics of airline alliance groups - examines both the level of the individual airline and the alliance group itself - applies recent insights from organisation theory. The readership includes airline managers, policy-makers, academic researchers and others interested in evolving multilateral alliances. It can also be used as a course book both in aviation management training and in more general modules on alliances for advanced students in air transport management.

Dr. Birgit Kleymann is Senior Assistant Professor of Strategy and Organization Theory at IÃ‰SEG School of Management, Université Catholique de Lille, France. In addition to assignments with airlines in Europe and South America, she has worked in internal consulting for a multinational manufacturer of transport equipment and as a sales executive for a manufacturer of transport aircraft. She holds a Private Pilot License and is a Certified Aircraft Dispatcher. Dr. Hannu SeristÃ¶ is Professor of International Business at the Helsinki School of Economics in Finland. Prior to his academic career he has worked for Finnair and McKinsey & Co. Aviation has been both a hobby and of professional interest to him. He has done pilot's basic training in the Finnish Air Force.