Artículos relacionados a The Greeks And Greek Love: A Radical Reappraisal of...

Davidson, James The Greeks And Greek Love: A Radical Reappraisal of Homosexuality In Ancient Greece

The Greeks And Greek Love: A Radical Reappraisal of Homosexuality In Ancient Greece 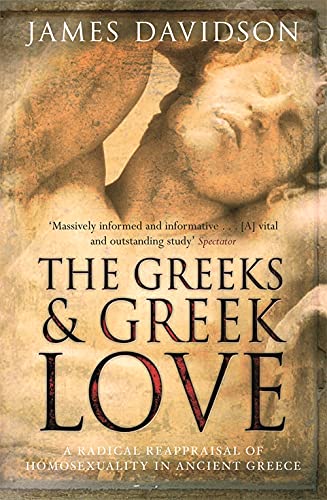 Spine creased, pencil mark on endpaper. Shipped from the U.K. All orders received before 3pm sent that weekday.

Davidson's own scholarship is impressive, but worn lightly, and matched with an easy tone that makes The Greeks and Greek Love a lively, and often very funny, read (LONDON REVIEW OF BOOKS)

A radical reappraisal of homosexuality in Ancient Greece, by a young historian described as 'the best thing to happen to ancient history for decades' (Andrew Roberts, MAIL ON SUNDAY)

Kenneth Dover's 1978 GREEK HOMOSEXUALITY remains the most recent single-volume treatment of the subject as a whole. Drawing on fifteen years of ensuing research, James Davidson rejects Dover's excessively theoretical approach, using a wide variety of sources unknown to him - court cases, romantic novels, satirical plays and poems - to present a view of the subject that, in contrast to Dover and to Foucault, stresses the humanity of the ancient Greeks, and how they lived their loves and pleasures, rather than their moral codes and the theorising of philosophers.

Homosexuality in Ancient Greece remains a central area of debate in the classics, in ancient history and lesbian and gay studies. Greek civilisation centrally underpins our own, providing a basis of so much of the west's culture and philosophy, yet the Greeks were more tolerant of homosexuality than virtually any other culture, certainly than the western civilisations that followed. The extent to which Greek attitudes to sexuality and in particular their privileging of 'Greek Love' were comparable and different to our own underlies the continuing debate over the formation of sexuality and the much wider question of the roles of nature and nurture in the formation of human behaviour and personality.

1. Greeks And Greek Love: A Radical Reappraisal Of Homosexuality In Ancient Greece

3. The Greeks and Greek Love

4. The Greeks and Greek Love