Artículos relacionados a The Mughal Throne: The Saga of India's Great Emperors

The Mughal Throne: The Saga of India's Great Emperors 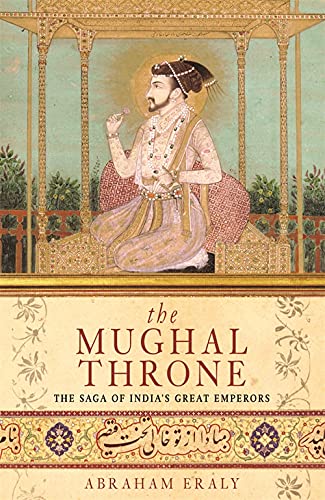 This is a majesterial history covering six reigns of that larger-than-life empire... this paperback edition improves on the hardback with some full colour illustrations. (SUNDAY TELEGRAPH)

Fans of Starkey or Schama should now look east with Abraham Eraly... This edition improves on the hardback with a sumptuous selection of Mughal art. (BOYD TONKIN THE INDEPENDENT)

An entertaining and informative journey charting the rise of the Mughal dynasty while examining the lives, concerns and fascinations of the first six of the 11 Indian emperors... who each in their different way ruled with a ruthless, ego-driven aggression that helped preserve thrones, cities, artefacts and harems while advocating war, pillage and plunder. (IRISH TIMES)

A history of the great Mughal rulers of India, one of the world's greatest empires.

In December 1525 Babur, the great grandson of the Mongol conqueror Tamberlaine, crossed the Indus river into the Punjab with a modest army and some cannon. At the battle of Panipat five months later he routed the mammoth army of the Afghan ruler of Hindustan. Mughal rule in India had begun. It was to continue for over three centuries, shaping India for all time. Full of dramatic episodes and colourful detail, THE MUGHAL EMPIRE tells the story of one of the world's great empires.

3. The Mughal Throne: The Saga of India's Great Emperors