Artículos relacionados a The Unadulterated Cat 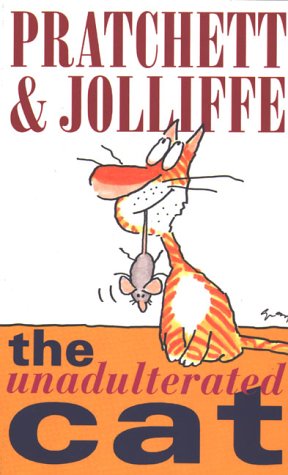 The Unadulterated Cat is becoming an endangered species as more and more of us settle for those boring mass-produced cats the ad-men sell us - the pussies that purr into their gold-plated food bowls on the telly. But the Campaign for Real Cats sets out to change all that by helping us to recognise a true, unadulterated cat when we see one.

For example: real cats have ears that look like they¿ve been trimmed with pinking shears; real cats never wear flea collars . . . or appear on Christmas cards . . . or chase anything with a bell in it; real cats do eat quiche. And giblets. And butter. And anything else left on the table, if they think they can get away with it. Real cats can hear a fridge door opening two rooms away . . .

Sir Terry Pratchett is a publishing phenomenon. Among his many prizes and citations are the World Fantasy Life Achievement Award, the Carnegie Medal, the BSFA Award, eight honorary doctorates and, of course, a knighthood. In 2012, he won a BAFTA for his documentary on the subject of assisted suicide, 'Terry Pratchett: Choosing to Die'. He is the author of fifty bestselling books but is best known for the globally renowned Discworld series.

The first Discworld novel, The Colour of Magic, was published in 1983, and the series is still going strong almost three decades later. Four Discworld novels - Hogfather, Going Postal, The Colour of Magic and The Light Fantastic - have been adapted for television, with more to follow. His books have sold approximately 85 million copies worldwide (but who's counting?), and been translated into thirty-seven languages.

In 2007, Terry Pratchett was diagnosed with early onset Alzheimer's Disease. He died in 2015.

Descripción Orion, 1996. Paperback. Condición: Used; Good. **Simply Brit** Shipped with Premium postal service within 24 hours from the UK with impressive delivery time. We have dispatched from our book depository; items of good condition to over ten million satisfied customers worldwide. We are committed to providing you with reliable and efficient service at all times. Nş de ref. del artículo: mon0001532938

Descripción Orion mass market paperback, 1996. Paperback. Condición: Used; Good. **SHIPPED FROM UK** We believe you will be completely satisfied with our quick and reliable service. All orders are dispatched as swiftly as possible! Buy with confidence!. Nş de ref. del artículo: mon0001488189

Descripción Paperback. Condición: Very Good. The book has been read, but is in excellent condition. Pages are intact and not marred by notes or highlighting. The spine remains undamaged. Nş de ref. del artículo: GOR001222261

Descripción Paperback. Condición: Good. The book has been read but remains in clean condition. All pages are intact and the cover is intact. Some minor wear to the spine. Nş de ref. del artículo: GOR001307007