ArtŪculos relacionados a Judi Dench: With A Crack In Her Voice

Miller, John Judi Dench: With A Crack In Her Voice

Judi Dench: With A Crack In Her Voice 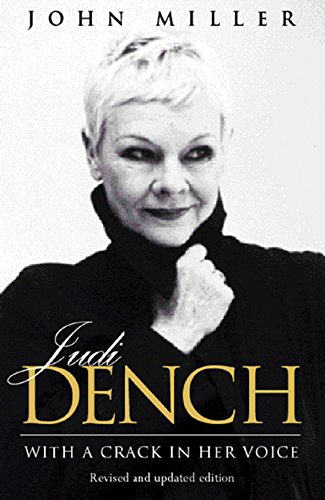 Whether it is her sunny temperament, or her gift of laughter or her wide-ranging abilities, or all three, Judi Dench is a star. Shortlisted for a 1998 Hollywood Oscar for her performance as Queen Victoria in Mrs Brown, she is widely loved and not only among the theatrical profession. Her long-running appearance opposite Geoffrey Palmer in the TV situation comedy AS TIME GOES BY has run to four series and gained her a TV Times readers' award as "the actress we most wish see more often on television". Her range is far greater than her rival Maggie Smith (Dench was created a Dame in 1988 two years before Smith). She juggles the National Theatre (a sell-out season in Sondheim's A Little Night Music and David Hare's Amy's View) withb tv and films (she is now established as 'M' in the latest James Bond series).
Judi Dench has always declined to write her memoirs, but agreed to co-operate with John Miller, whose life of Ralph Richardson was highly praised on publication in 1995. The only previous biography (by Gerald Jacobs and published in 1985) causes her to wrinkle her nose and laugh. "It didn't tell me anything I didn't know about myself. " John Miller's does that. The final chapter includes Dench's own diary she kept in the run-up to the Oscar ceremony in Hollywood in March 1998.

John Miller's career has principally been in TV and radio (for the BBC) and for ten years until 1992 for the south of England ITV company, TVS. His writing has mainly been associated with actors (including John Gielgud and Ralph Richardson).

1. JUDI DENCH WITH A CRACK IN HER VOICE [Paperback] John Miller