Artículos relacionados a Mallmann-Showell, J: Companion to the German Navy 1939-1945 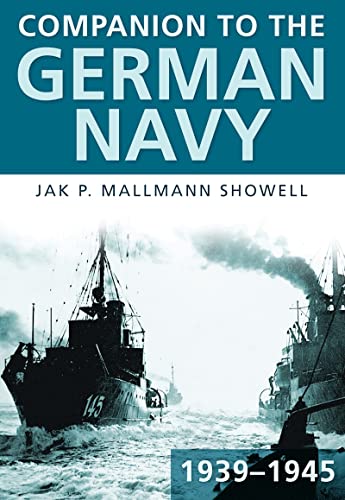 This book covers the lot - and does it very well indeed. --Ships Monthly, December '09

Synonymous with such infamous battleships as the 'Bismarck', 'Scharnhorst' and 'Tirpitz', the German Navy (or Reichsmarine) was renamed the Kriegsmarine in 1935, shortly after the emergence of the Nazi State, and went through a major re-organization in 1939. During the Second World War, it became a much-feared adversary both on and beneath the high seas, with its marauding U-boat 'wolf packs' coming close to defeating Britain in the Battle of the Atlantic. Jak Showell examines the different roles of the Fleet, and its organization and training activities during the war years. Incidents and operations are described, together with technical data for ships, U-boats and their weaponry. A guide to German Navy uniforms and insignia is included, together with full details of rank structure and specialist trades.

Descripción The History Press, Stroud, Gloucestershire, U.K., 2009. Soft Cover. Condición: New. No Jacket. Reprint. Pages xiv + 274 including index and with many monochrome illustrations. The author examines the different roles of the German Navy and its organisation and training activities during the war years. A respected adversary across and beneath the high seas, the German Navy's maurauding U-boat 'wolf-packs' came close to defeating Britain in the battle of the Atlantic. (Bmk12-SK-NTW-U15) Size: Trade Paperback. Nş de ref. del artículo: 160474