Artículos relacionados a The Pursuit of Wild Animals for Sport: Comprising Shooting,... 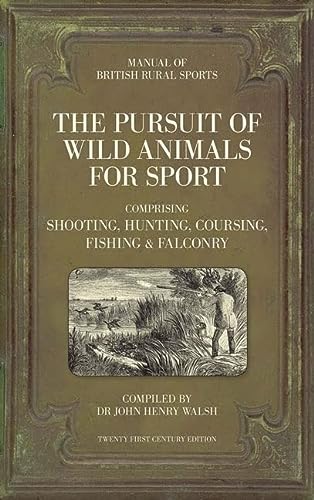 The Manual of British Rural Sports first appeared in 1856 and quickly established itself as an excellent handbook to the many outdoor pursuits practised in the British countryside - shooting, hunting, coursing, fishing and falconry. All aspects of these pursuits are covered, including rules and regulations, tactics and information/diagrams of the required equipment. Informs the Victorian gentleman which floats to use when fishing for bream and which calibre of shot to use when shooting grouse. Nostalgic in its production, this book will capture an important niche in the expanding heritage market.

Dr. John Henry Walsh was a respected Victorian writer on sport who produced many works under his nomme de plume of Stonehenge. Initially a surgeon, he gave up medicine to become editor of Field magazine, a founder of the National Coursing Club, and the All England Lawn Tennis Club. He produced a prolific number of writings on rural sport. His Manuals of British Rural Sports ran to 16 editions.

1. The Pursuit of Wild Animals for Sport