Artículos relacionados a The Notebook: The love story to end all love stories...

The Notebook: The love story to end all love stories (Calhoun Family Saga) 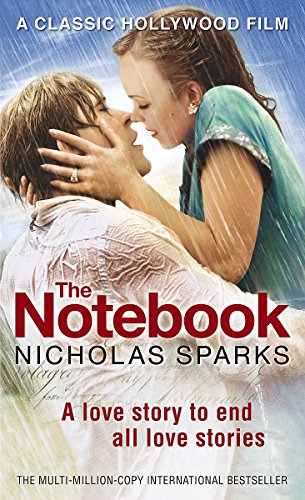 "Somewhere," muses Noah Calhoun, while sitting on his porch in the moonight, "there were people making love." Anyway, head elsewhere for Great Literature, but if you're in the market to get your heartstrings plucked, look no further. The Notebook, a Southern-fried story of love-lost-and-found-again, revolves around a single time-honored romantic dilemma: will beautiful Allison Nelson stay with Mr. Respectability (to whom she happens to be engaged), or will she hook up with Noah, the romantic rascal she left so many years ago? We're not telling, but you have two guesses and the first one doesn't count. Decades later, after Allison develops Alzheimer's, her beau uses "the notebook" to read her the story of the great love she's plumb forgot. The Notebook--film rights already sold, thank you very much--is a little glazed doughnut of a book: sticky- sweet, satisfying, not much nourishment. But who cares? Take an extra vitamin and indulge. Amazon.com Achingly moving and will have you weeping for the joy and tragedy of it all DAILY MAIL Set in 1940's America this tale of love and tragedy will have even the iciest of ice maidens bawling their eyes out. A story of an impossible love...The Notebook is a rollercoaster of emotions. Do not read if you are feeling fragile! NO.1 MAGAZINE

How far can love endure?

Noah Calhoun has just returned from World War Two. Attempting to escape the ghosts of battle, he tries to concentrate on restoring an old plantation home to its former glory. And yet he is haunted by images of the beautiful girl he met there fourteen years before, a girl who captured his heart like no other.

But when these distant memories begin to slide into reality, the passion that had lain still is ignited once more. Though so much is in their way, the miraculous force of their love refuses to fade.