Artículos relacionados a Morality for Beautiful Girls (No.1 Ladies' Detective... 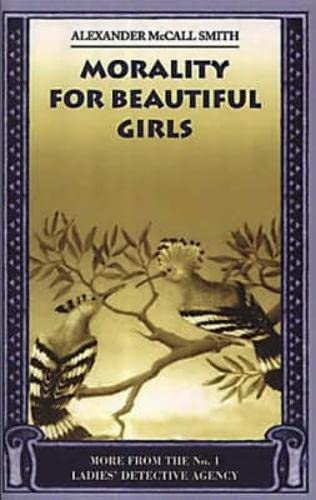 The No 1 Ladies' Detective Agency introduced the engaging and sassy owner of Botswana's only detective agency, Precious Ramotswe. This latest novel finds her expanding her business to take in the world of car repair and a beauty pageant.

Alexander McCall Smith is the author of the highly successful No. 1 Ladies' Detective Agency series, which has sold over twenty-five million copies. Since then he has devoted his time to the writing of fiction and has seen his various series of books translated into over forty-six languages and become bestsellers throughout the world. These include the 44 Scotland Street novels, first published as a serial novel in the Scotsman, the Isabel Dalhousie novels, the Von Igelfeld series and the Corduroy Mansions novels.

Descripción Polygon An Imprint of Birlinn Limited, 2003. Soft cover. Condición: New. No Jacket. 4th Edition. Published by Polygon originally in 2001 this copy was printed in 2003 and is in pristine condition. The Book was signed by Alexander McCall Smith at the 2018 Edinburgh Book Festival. This is the 3rd book in the No. 1 Ladies Detective Agency series and has 225 pages. In Morality for Beautiful Girls, Precious Ramotswe, founder and owner of the only detective agency for the concerns of both ladies and others, investigates the alleged poisoning of the brother of an important " Government Man, " and the moral character of the four finalists of the Miss Beauty and Integrity Contest, the winner of which will almost certainly be a contestant for the title of Miss Botswana. Yet her business is having money problems, and when other difficulties arise at her fiance's Tlokweng Road Speedy Motors, she discovers the reliable Mr J.L.B. Matekoni is more complicated then he seems. Signed by Author(s). Nş de ref. del artículo: 2004505