Artículos relacionados a Mao's Great Famine: The History of China's...

Mao's Great Famine: The History of China's Most Devastating Catastrophe, 1958-62 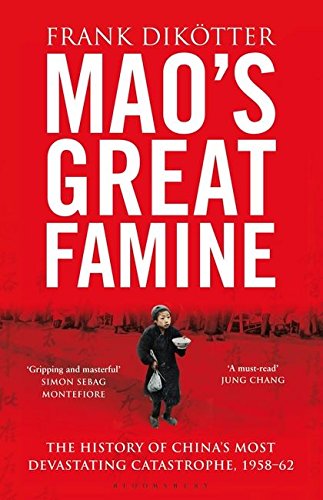 'The most authoritative and comprehensive study of the biggest and most lethal famine in history. A must-read' Jung Chang 'Mao's Great Famine' is a gripping and masterful portrait of the brutal court of Mao, based on new research but also written with great narrative verve, that tells the gripping story of the manmade famine that killed 45 million people from the dictator and his henchmen down to the villages of rural China' Simon Sebag Montefiore

Between 1958 and 1962, China descended into hell. Mao Zedong threw his country into a frenzy with the Great Leap Forward, an attempt to catch up and overtake Britain in less than 15 years. The experiment ended in the greatest catastrophe the country had ever known, destroying tens of millions of lives. Access to Communist Party archives has long been denied to all but the most loyal historians, but now a new law has opened up thousands of central and provincial documents that fundamentally change the way one can study the Maoist era. Frank Dikotter's astonishing, riveting and magnificently detailed book chronicles an era in Chinese history much speculated about but never before fully documented. Dikotter shows that instead of lifting the country among the world's superpowers and proving the power of communism, as Mao imagined, in reality the Great Leap Forward was a giant - and disastrous - step in the opposite direction. He demonstrates, as nobody has before, that under this initiative the country became the site not only of one of the most deadly mass killings of human history (at least 45 million people were worked, starved or beaten to death) but also the greatest demolition of real estate - and catastrophe for the natural environment - in human history, as up to a third of all housing was turned to rubble and the land savaged in the maniacal pursuit of steel and other industrial accomplishments. Piecing together both the vicious machinations in the corridors of power and the everyday experiences of ordinary people, Dikotter at last gives voice to the dead and disenfranchised. Exhaustively researched and brilliantly written, this magisterial, groundbreaking account definitively recasts the history of the People's Republic of China.

1. Mao's Great Famine: The History of China's Most Devastating Catastrophe, 1958-62