Artículos relacionados a They F*** You Up: How to Survive Family Life

James, Oliver They F*** You Up: How to Survive Family Life

They F*** You Up: How to Survive Family Life 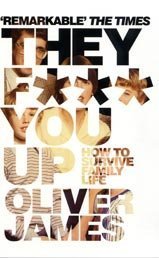 Clinical psychologist Oliver James demonstrates that who we are is largely the result of the way we were cared for during our first six years, rather than our genes and other environmental factors. The particular way we were treated in these earliest months and years explains why siblings can be so different. They may have been raised in the same family, but their mother and father related so differently to each of them that they might as well had a different parents. These early experiences affect our choices of friends and lovers, define our interests and professional drives, make us more or less prone to mental illness. James illustrates a vast body of startling new scientific evidence with detailed clinical case histories and those of prominent interviewees as diverse as Jeffrey Archer and Stephen Fry, along with revealing psychobiographies of the likes of Woody Allen, Mia Farrow and Prince Charles. Each chapter also includes a straightforward questionnaire that allows you to complete an 'emotional audit' so that you can be more aware of your role in the family script. "They F**k You Up" is a vital, challenging book offering compelling insights into how childhood experience provides the key to personality.

Oliver James trained and practised as a child clinical psychologist, and since 1987 has worked as a writer, journalist and television documentary producer and presenter. His books include Juvenile Violence in a Winner-Loser Culture and the best-selling Britain on the Couch which was also a successful documentary series for Channel 4. He is a trustee of two children's charities, the National Family and Parenting Institute and Homestart.