Artículos relacionados a A Social History of the Media: From Gutenburg to the...

Burke, Peter; Briggs, Asa A Social History of the Media: From Gutenburg to the Internet

A Social History of the Media: From Gutenburg to the Internet 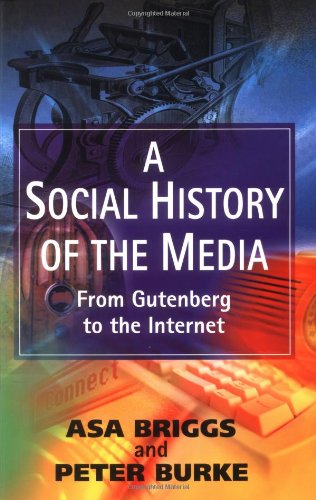 'A masterpiece of compression and synthesis. It manages to omit nothing and yet present itself as something much more readable than a hurried review of a vast terrain. It is thoroughly comprehensive. The styles of the two writers mesh very well together. They have adopted an approach which is partly that of a reference work and partly that of a flowing historical discourse. This work has the virtue of being almost an encyclopaedia and so it will be a vital tool for a wide variety of readers.' Professor Anthony Smith, Magdalen College, University of Oxford 'Recommended for academic libraries needing a general survey of media history ' Library Journal "An intelligent, scholarly and eminently sensible introduction to the kind of methodological issues it is actually helpful to address" English Historical Review "A very readable book." European Journal of Communication "A Social History of the Media is full of illuminating details and quotations. [It] is an ideal textbook for students and a lesson to professional historians that they need to take the media seriously as a subject in its own right." Bert Hogenkamp, IRSH vol. 49 (2004)

Written by two leading social and cultural historians, A Social History of the Media provides a masterful overview of communication media and of the social and cultural contexts within which they emerged and evolved over time. The authors retrace the complex and multiple paths of development, exploring the interrelations between communication media and other aspects of social life. The scope of this book is far-reaching, exploring the history of the different means of communication in the West from the invention of printing to the Internet. It deals with each constituent element in what came to be called 'the media' and discusses, among other things, the continuing importance of oral and manuscript communication, the rise of print, the relationship between physical transportation and social communication, and the development of electronic media. The book concludes with an account of the convergences associated with digital communication technology, the rise of the internet and the phenomenon of globalization. Avoiding technological determinism and rejecting assumptions of straightforward evolutionary progress, this book brings out the rich and varied histories of communication media. It will be an ideal text for students in history, media and cultural studies and journalism, but it will also appeal to a wide general readership.

1. A Social History of the Media

2. A Social History of the Media