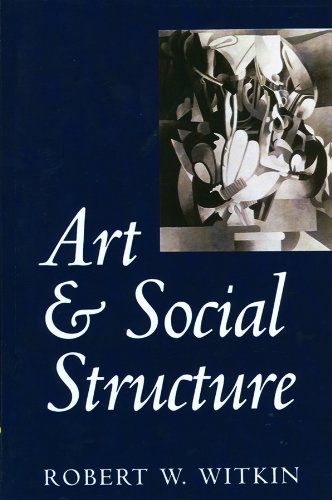 "This is an interesting, refreshing and constructive intervention into the sociology of art ... It is a mark of the book's success that Witkin contributes a theory of social relationships and modernity which establishes the effectivity of art: art is good to think with." Gordon Fyfe, Keele University "This book will set the standard in today's sociology of art. Witkin explicates sociologically some aspects of art - abstraction, perceptual codes and hte like - that seem least amenable to sociological explication. A challenging book, yet a pleasure to read." Scott Lash, University of Lancaster "Witkin's newest book is a valuable contribution by a sociologist and art theorist to the debate on 'social semiotic' ... It provides a far more careful intrication of the social dimensions of the social semiotic than most 'social semioticians' have bothered with." Social Semiotics

This book is a major contribution to the sociology of art. Its central concern is the social determinants of artistic revolutions. Art is seen as a powerful means of thinking and constructing social relations. In analysing the art of ancient civilizations as well as those of Renaissance Europe and of the modern world, Witkin claims that each style makes it possible to think experience in ways that both reflect and realize the predominant system of social relations.Witkin offers an original version of the sociology of art, one which is in the grand tradition of sociological theory and at the same time fully in touch with current discourses on modernity. The discussion of art 'styles' and 'movements' is illustrated with pictures of well-known paintings. There is also a detailed discussion of the work of Jan van Eyck and of Paul Cezanne, each of whom is held to occupy an important transitional position between 'tradition' and 'modernity'. This book will be of interest to scholars and students of the sociology of the arts, art history, the sociology of culture, cultural studies and media studies generally.