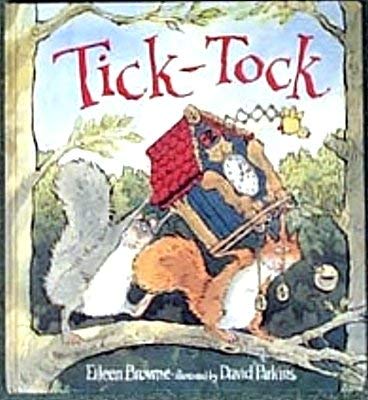 When Skip Squirrel's mum goes out she warns Skip not to jump about on the furniture - and says she'll be back by four. No sooner has she gone though, than Skip's friend Brainy arrives, mother's warning is forgotten and soon the two of them are jumping about happily. Unfortunately they accidentally break the cuckoo clock and the two friends are in a race against time to get it repaired before Skip's mother returns. They try Weasel, the bicycle repairer, then Hedgehog, the cobbler - but they only make things worse. Finally though, Owl fixes the clock for them and they get it home just before Mum returns. Then on the stroke of four, the cuckoo clock sounds, and instead of going cuckoo the clock goes tu-whit-tu-whoo! Eileen Browne has previously been shortlisted for the Smarties Book Prize in 1986 for "Through the Window". She has also written "No Problem", which was illustrated by David Parkins. He has previously illustrated "Sophie's Tom", "Sophie Hits Six" and "Sophie in the Saddle". He also illustrates the Billy Whizz column for "The Beano".

Descripción Walker Books Ltd, 1993. Hardcover. Condición: Used; Good. Dispatched, from the UK, within 48 hours of ordering. This book is in good condition but will show signs of previous ownership. Please expect some creasing to the spine and/or minor damage to the cover. Damaged cover. The cover of is slightly damaged for instance a torn or bent corner. Nş de ref. del artículo: CHL5229664

Descripción Walker Books Ltd, 1993. Hardcover. Condición: Used; Good. **SHIPPED FROM UK** We believe you will be completely satisfied with our quick and reliable service. All orders are dispatched as swiftly as possible! Buy with confidence!. Nş de ref. del artículo: mon0002107688

Descripción Hardback. Condición: Very Good. The book has been read, but is in excellent condition. Pages are intact and not marred by notes or highlighting. The spine remains undamaged. Nş de ref. del artículo: GOR002354129