Artículos relacionados a Two Sides of the Moon: Our Story of the Cold War Space...

Two Sides of the Moon: Our Story of the Cold War Space Race 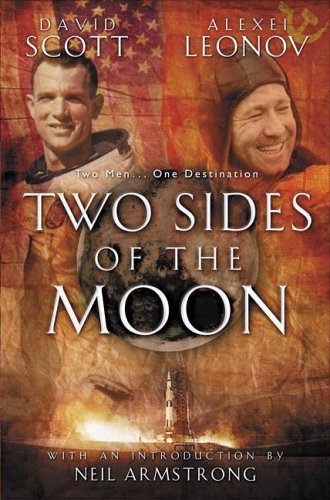 'Their recollections have been intercut to create a dramatic chronological story whose chatty style gives us a compelling account of a slice of the cold war ... With refreshing candour, Leonov relates how the EVA, or "space walk", that earned him his "first" in the history books nearly cost him his life... Space fans will find much to admire in this book, not least the fact that it addresses why the Soviets lost ground after beating the American's to one milestone after another' Sunday Times 09/05 'A page-turner, a reminder that behind the high technology there was high drama' Guardian 6/5 'A unique dual perspective on the space race, its risks and the men who took them ... The tale they have written is a testament to the heights mankind can achieve - and a tale of hope for conciliation across the political divide' The Scotsman 21/5 '[Leonov's story is] fresh ... one of the first extended accounts of what service in the Russian space programme was like. The revelations are all the more fascinating because they are offered in parrallel to Scott's remarkably similar experiences... I was moved by humanity of Leonov's story, evoked most poignantly by tiny details ... The space race can now be seen not as an antagonistic contest, but as a remarkable human achievement. Read this book, and prepare to be inspired' SCOTLAND ON SUNDAY 'Compelling reading' OPTIMA 'An extraordinary book that provides a very valuable account of the way the Cold War was ended in Space. I much enjoyed reading it' Arthur C. Clarke 'Unique' Arthur C. Clarke, THES 'Fascinating ... packed with previously unknown details' ASTRONOMY NOW 'Scott and Leonov are admirable characters who tell their stories from different cultural perspectives but from similar scientific and technical points of view' The Times 9/4 'Excellently planned and well written. The authors have made a valuable contribution to the literature of the space race and its aftermath. I highly recommend this book' Sir Patrick Moore, THE SKY AT NIGHT

Growing up on either side of the Iron Curtain, Alexei Leonov and David Scott shared the same dream -- to become a pilot. Excelling at flying, they were chosen by their countries' burgeoning space programmes to be part of the greatest technological race ever -- to land a man on the moon. Cosmonaut Alexei Leonov became the first man to walk in space. He won a place in history, but almost lost his life. In 1966, David Scott and Neil Armstrong were seconds away from dying as Gemini 8 spun violently out of control across space. Both men survived against dramatic odds and Scott went on to command the most complex expedition in the history of space exploration, Apollo 15. When the US and USSR space programmes were eventually brought together in the Apollo-Soyuz Test Project, Scott and Leonov finally met. The project marked the end of the Cold War silence and started a friendship that would last for decades.