Artículos relacionados a The Monk and the Philosopher: East Meets West in a...

Revel, Jean-François; Ricard, Matthieu The Monk and the Philosopher: East Meets West in a Father-son Dialogue

The Monk and the Philosopher: East Meets West in a Father-son Dialogue 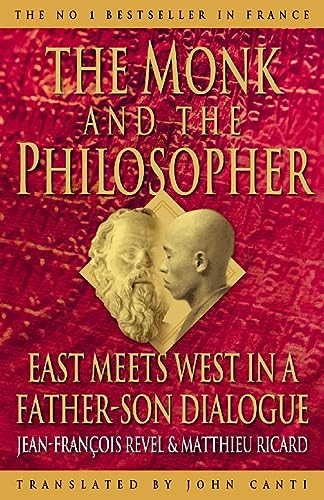 ‘The book skilfully educates readers who might be new to both eastern and western philosophy without alienating those already familiar with either strand. Neatly weaving in details of the father-son relationship, and why and how Matthieu turned to Buddhism, the discussion follows a logical and seamless line through every philosophical and metaphysical aspect of life... A wonderful book.”
Time Out

‘A serious and stimulating book handling some very abstract matter with sympathy and vigour.’
The Sunday Telegraph

The most ground-breaking meeting of Western philosophy and Eastern thought to date.

In this father-son dialogue, Revel and Ricard explore the most fundamental questions of human existence and the ways in which they are embraced by Eastern and Western thought. In this meeting of minds, they touch upon philsophy and spirituality, science and politics, psychology and ethics. They raise the eternal questions: Does life have meaning? What is consciousness? Is man free? Why is there suffering, war, hatred? Their responses are never dry or abstract. They are vital and practical answers that offer revolutionary approaches to how we can enrich the way we live our lives.

Revel, a highly influential philosopher and a confirmed agnostic, exposed his son Ricard to all of the tenets of Western philosophy. Ricard then went on to distinguish himself with high honours for his Ph.D. in molecular genetics, working with a Nobel laureate at the Pasteur Institute. His tutor had him slated for being a Nobel candidate himself. Nevertheless, Ricard left his high-flying scientific career to study Tibetan Buddhism in India. Twenty-five years later, now a monk, Ricard returns to discuss all the great questions (the meaning of life, death, suffering, war and the like) with his philosopher father. The resulting conversation is brilliant, accessible and the most lucid and eloquent meeting of Eastern & Western thought to date.

The dialogue illuminates the reasons the West’s increasing attraction to this 2,500 year old Eastern tradition. Ricard himself is an embodiment of two cultures at the highest levels of knowledge. And although they come from vastly different perspectives their father-son relationship offers a perfect context for oppenness and true dialogue.

1. THE MONK AND THE PHILOSOPHER: EAST MEETS WEST IN A FATHER-SON DIALOGUE

2. THE MONK AND THE PHILOSOPHER: EAST MEETS WEST IN A FATHER-SON DIALOGUE