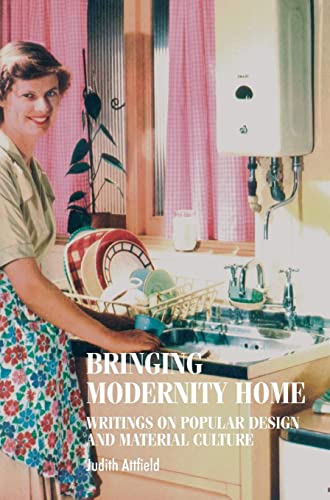 An invaluable account of the broader development of design history in Britain. Judy Attfield (1937-2006) was a pioneering design historian, and this posthumous publication of her work acts as a reminder as to just how important her work was, and continues to be, for the development of the subject into the twenty=first century. The book also offers an individual chronicle of the history of design history over the past twenty years. This collection is a fitting testament to an imprtant design historian. --Anne Wealleans, Kingston University London, Studies in the Decorative Arts Spring-Summer 2008

"Bringing Modernity Home" offers a retrospective view of the development of popular taste and the beginnings of a new phase in the rise of the consumer society in the post second world war period through a series of thought-provoking accounts of developments in modern design history. It traces the change to consumer-led design after a time of grim austerity and recovery from the war while the state and production considerations held sway at a time when consumers 'couldn't afford taste'. The case studies of so-called frivolous items like the cocktail cabinet, the tufted carpet, and the rise of DIY in the working class homes of the 'new towns' gives a flavour of the excitement and thrill they afforded designers, makers and consumers after the harsh deprivations of the war. This collection of key essays about the domestic environment appears at a moment when the home is no longer dismissed as an insignificant feminine area, but is increasingly recognised as one of the fundamental units of human culture and, as such, of immense importance as a site for the study of society. While attending to individual case studies it also offers a synoptic view of the culture of design from a variety of perspectives. These range from the history of design education, to the view of a dying breed of craft-based designer-makers, to changes within the carpet and furniture industries and consumers taking control of the design of their own homes through doing their own interior design. It shows how apparently insignificant everyday objects as the coffee table can be seen as a sign of shift in the balance of power from production to consumption at a particular historical moment in the middle of the twentieth century. And thus it is possible to see how consumers adapted to modernity that revolutionised their lives through their consumption choices of such commodities as domestic furnishings.