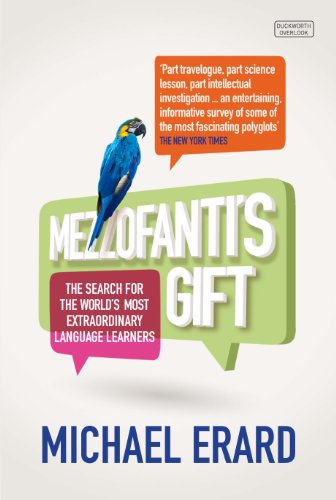 Michael Erard has written the first serious book about the people who master vast numbers of languages or claim to ... he approaches his topic with both wonder and a healthy dash of scepticism ... fascinating * Economist * A fine addition to our favourite books about language ... Captivating and illuminating, Mezzofanti's Gift is as much an absorbing piece of investigative voyeurism into superhuman feats as it is an intelligent invitation to visit the outer limits of our own cerebral potential * Atlantic Monthly * Erard gets beneath the surface of the hyperpolyglot, piercing the myth of perfect competence, to show the actual landscape of motives, obstacles and satisfactions that texture the world of the long-distance language-learner -- Nicholas Ostler, author of The Last Lingua Franca

Multilingualism is on the rise in the coming decades, as many as two billion people will learn English as a second language. The next stage up from multilingualism is the domain of the hyperpolyglot or superlearner: someone who claims to know at least six languages. But what does it mean to know a language? Can a person claim to speak a language fluently if it isn't their mother tongue? What role does culture play in learning languages? In this accessible and enthralling book, Michael Erard discusses the upper limits of the brain's capacity to learn languages and sheds light on the hyperpolyglot phenomenon, from the Italian cardinal Giuseppe Mezzofanti, who was said to speak as many as seventy-two languages, to the superlearners of the 21st century. Erard's exploration spans the globe as he travels to meet these living marvels and to investigate those of antiquity, and his discoveries not only illuminate the intellectual potential within all of us, but also indicate how we might begin to unlock it.

1. Mezzofanti's Gift: The Search for the World's Most Extraordinary Language Learners

2. Mezzofanti's Gift: The Search for the World's Most Extraordinary Language Learners

3. Mezzofanti's Gift: The Search for the World's Most Extraordinary Language Learners