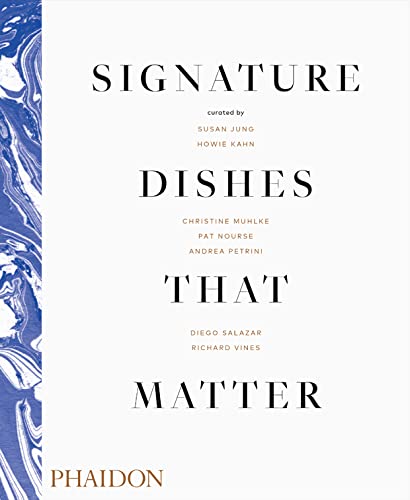 "A definitive canon of cuisine."-Mitchell Davis "It's a fascinating, easy read about the origins of dishes that have become part of the culinary vernacular... It's a celebration of dishes that define cultures, eras and peoples."-The Globe & Mail

The first book to bring to life the dishes that have shaped gastronomy for the past three centuries recipes from the Classic to the cutting-edge, including: Auguste escoffier's Peach Melba (the Savoy, 1893); caesar cardini's caesar salad (caesar's, 1924); Michel Bras' Chocolate fondant (Bras, 1981); and Ferran and Albert adriÓ's Liquid olive (elBulli, 2003) includes specially commissioned illustrations of each dish, with original recipes in the second section of the book selected by an International panel of award-winning journalist, editors, food critics, and writers a unique addition to Phaidon's list of bestselling Cookbook - ideal for readers captivated by the rich history of restaurant culture

Descripci¾n Phaidon Press Ltd, United Kingdom, 2019. Hardback. Condici¾n: New. Language: English. Brand new Book. A global celebration of the iconic restaurant dishes that defined the course of culinary history over the past 300 yearsToday's food-lovers often travel the globe to enjoy the food of acclaimed chefs. Yet the tradition of seeking out unforgettable dining experiences goes back centuries, and this gorgeous book reveals the closely held secrets behind the world's most iconic recipes - dishes that put restaurants on the map, from 19thcentury fine dining and popular classics, to today's most innovative kitchens, both high-end and casual. Curated by experts and organized chronologically, it's both a landmark cookbook and a fascinating cultural history of dining out.The narrative texts are by Christine Muhlke, the foreword by Mitchell Davis, and illustrations by Adriano Rampazzo. N║ de ref. del artĒculo: AA79780714879321

Descripci¾n Hardcover. Condici¾n: New. Hardcover. Today's food-lovers often travel the globe to enjoy the food of acclaimed chefs. Yet the tradition of seeking out unforgettable dining experiences goes back centuries, and this gorgeous bo.Shipping may be from multiple locations in the US or from the UK, depending on stock availability. 448 pages. 1.790. N║ de ref. del artĒculo: 9780714879321