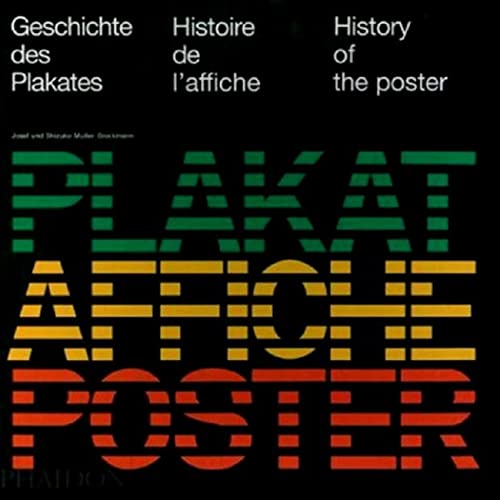 "According to the Muller-Brockmans, a poster `should inform, stimulate, activate, expound, query, provoke, convince.' While modern posters may not live up to these ambitions, this book certainly does."-Francesca Gavin, Blueprint "Defends poster art against accusations of being easy and accessible by making the point that a mass-communications brief is more difficult to satisfy than the solitary artist's need for self-expression."-Stephen Bayley, Independent "A design classic."-The Times "A fascinating journey through the glory days of that most inescapable method of visual communication... There's arresting imagery on almost every page."-Independent

History of the Poster is a landmark account of one of the most prolific visual traditions of our culture. Originally published in 1971, this seminal study is clearly written and richly illustrated. Now reprinted by Phaidon, History of the Poster is an essential read for anyone intrigued by this most modern medium. The book presents a richly extensive collection of posters, ranging from the late nineteenth century to the early 1970s, when the book was published for the first time. Conceived, written and designed by one of the best and most influential poster designers of the twentieth century, the book defines the nature of a poster and indicates the laws of designing it. The authors define and describe four fundamental conceptions of the poster, analysing the function-type of each and presenting an array of methods used to capture the attention of the viewer. The authors employ sure aesthetic judgement in their selection of images as the reader is guided through the formation and evolution of style, emphasis and connotation in poster design. This reprint has not tampered in the least with the original edition's design or layout - staying true to Muller-Brockmann's original and immortal concept.

1. History of the Poster

2. History of the Poster

4. History of the Poster

6. History of the Poster

7. History of the Poster