Artículos relacionados a A Neotropical Companion: An Introduction to the Animals,...

Kricher, John A Neotropical Companion: An Introduction to the Animals, Plants, and Ecosystems of the New World Tropics, Revised and Expanded Second Edition

A Neotropical Companion: An Introduction to the Animals, Plants, and Ecosystems of the New World Tropics, Revised and Expanded Second Edition 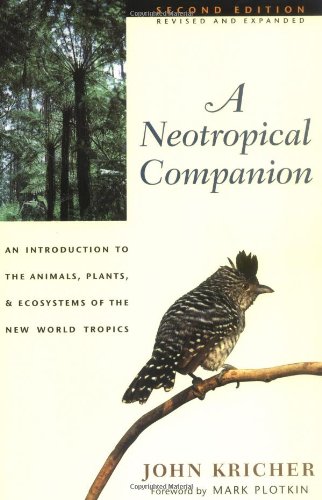 One of Choice's Outstanding Academic Titles for 1998 "The book is exactly what it says it is, a companion to take with you on your travels in the New World tropics... The author has written ... with just the right amount of informality and humor."--Journal of Natural History "An intense and lively field guide...compact and richly substantive"--Scientific American

A Neotropical Companion is an extraordinarily readable introduction to the American tropics, the lands of Central and South America, their remarkable rainforests and other ecosystems, and the creatures that live there. It is the most comprehensive one-volume guide to the Neotropics available today. Widely praised in its first edition, it remains a book of unparalleled value to tourists, students, and scientists alike. This second edition has been substantially revised and expanded to incorporate the abundance of new scientific information that has been produced since it was first published in 1989. Major additions have been made to every chapter, and new chapters have been added on Neotropical ecosystems, human ecology, and the effects of deforestation. Biodiversity and its preservation are discussed throughout the book, and Neotropical evolution is described in detail. This new edition offers all new drawings and photographs, many of them in color. As enthusiastic readers of the first edition will attest, this is a charming book. Wearing his learning lightly and writing with ease and humor, John Kricher presents the complexities of tropical ecology as accessible and nonintimidating. Kricher is so thoroughly knowledgeable and the book is so complete in its coverage that general readers and ecotourists will not need any other book to help them identify and understand the plants and animals, from birds to bugs, that they will encounter in their travels to the New World tropics. At the same time, it will fascinate armchair travelers and students who may get no closer to the Neotropics than this engagingly written book.