ArtĒculos relacionados a Unpaid Professionals: Commercialism and Conflict in... 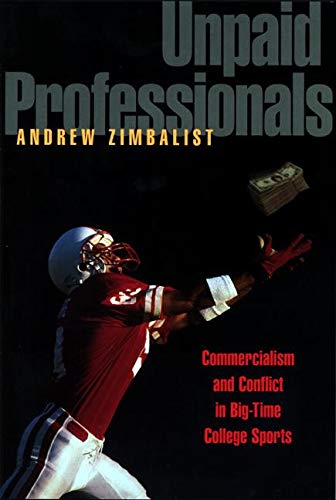 "In remarkably clear and clear-eyed prose (even his charts are readable), Zimbalist follows the money instead of the ball in the emotion-charged world of college sports."--Robert Lipsyte, New York Times

"Zimbalist got game! . . . A solid analysis of a segment of American life that Zimbalist claims is in dire need of reform. After reading this book, you'll find it hard to disagree with him. . . . Lots of food for thought here."--John Greenya, The Washington Post Book World

"Complete and authoritative. . . Zimbalist offers a stinging indictment of the system, how it works for some and victimizes others."--Mark Hyman, Business Week

"College sports are all about money, but no one has ever followed that money as closely as Zimbalist does. . . . [A] stunning catalog of excess and exploitation."--Booklist

"Although many of the problems facing college athletics today have been around for decades, the explosion of money and media attention has so raised the stakes that college sports is on the verge of self-destruction, argues Zimbalist (Baseball and Billions), a professor of economics at Smith College. . . . Zimbalist, who knows his way around the locker room and a balance sheet, provides a compelling case for the need to reform college athletics."--Publisher's Weekly

"Zimbalist, an economics professor at Smith College who has written extensively on the business side of sports, assays whether big-time sports are worth the wealth of problems they create for colleges and universities. . . . Zimbalist concludes with a ten point reform program, including such steps as gathering financial support from professional leagues, having a quota of paid non-matriculated athletes, cutting football scholarships nearly in half, shortening seasons, and eliminating freshman eligibility."--John M. Maxymuk, Library Journal

"Zimbalist believes that barring freshmen from competing would be another enormous step forward. To trim costs, he would dramatically cut football scholarships, pointing out that Notre Dame from 1945 to 1950 didn't lose a game and used just 38 players. He would shorten seasons, shorten practice hours, take away shoe contract windfalls from coaches. Zimbalist says he doesn't want to destroy college sports. He simply wants a "responsible analysis" to guide the future of the games and spectacles, reforms "to minimize the negative features but to preserve what people love." As you wait for the next big game--or the next big scandal--read Unpaid Professionals. It could turn you into a more thoughtful, discerning fan."--Jay Weiner, Minneapolis Star-Tribune

"With Unpaid Professionals, sports economist Zimbalist adds significantly to a growing literature from researchers and practitioners on big-time college athletics. . . . Zimbalist brings the economist's eye for theory and empirical research to now-familiar topics."--Choice

"This book is a good recap of where college sports are now as both an economic and social force on campus with little to do with education. Zimbalist provides at least a discussion point about what can be done to improve the situation."--David Bush, The San Fransisco Chronicle

Big-time college sports embodies the ideals of amateurism and provides an important complement to university education. Or so its apologists would have us believe. As Andrew Zimbalist shows in this unprecedented analysis, college sports is really a massively commercialized industry based on activities that are often irrelevant and even harmful to education. Zimbalist combines groundbreaking empirical research and a talent for storytelling to provide a firm, factual basis for the many arguments that currently rage about the goals, history, structure, incentive system, and legal architecture of college sports. He paints a picture of a system in desperate need of reform and presents bold recommendations to chart a more sensible future.

Zimbalist begins by showing that today's problems are nothing new--that schools have been consumed for more than a century by debates about cheating, commercialism, and the erosion of academic standards. He then takes us into the world of the modern student athlete, explaining the incentives that, for example, encourage star athletes to abandon college for the pros, that create such useless courses as "The Theory of Basketball," and that lead students to ignore classes despite the astronomical odds against becoming a professional athlete. Zimbalist discusses the economic and legal aspects of gender equity in college sports. He assesses the economic impact of television and radio contracts and the financial rewards that come from winning major championships. He examines the often harmful effects of corporate sponsorship and shows that, despite such sponsorship, most schools run their athletic programs at a loss. Zimbalist also considers the relevance of antitrust laws to college sports and asks whether student athletes are ultimately exploited by the system.

Zimbalist's provocative recommendations include eliminating freshman eligibility for sports, restricting coaches' access to "sneaker money" from corporations, and ending the hypocrisy about professionalism by allowing teams to employ a quota of non-students as well as to receive funding from the pro leagues. A mixture of lively anecdotes, hard economic data, cogent arguments, and clear analysis, Unpaid Professionals will revitalize debate about a subject close to the hearts and minds of millions of Americans.