Artículos relacionados a The Therapy of Desire: Theory and Practice in Hellenistic...

The Therapy of Desire: Theory and Practice in Hellenistic Ethics (Martin Classical Lectures) 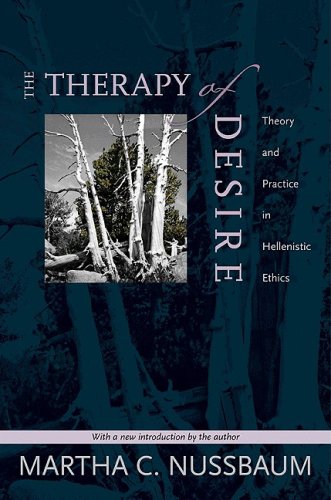 "By turns wise and witty, silly and Socratic, critical and compassionate, Nussbaum proves to be an extraordinarily addictive literary companion.... She has triumphantly proved ... that the life of the mind can be one of the highest and most rewarding pursuits known to man, including woman.... If Nikidion got one-tenth of the pummeling, excitement, and stimulation in the Garden of Epicurus that Nussbaum provides, intellectually and emotionally, in this densely argued volume, I should be very much surprised.... This is a book to live with."--Peter Green, The New Republic

"Nussbaum adventurously straddles boundaries conventionally drawn between philosophy and its own history, between philosophy and literature, and between scholarship and the social sciences.... Few modern books have done as much as this one promises to do in raising the profile of Hellenistic philosophy. It is constantly gripping and absorbing, written with rare eloquence and containing long stretches of almost lyrical intensity. A literary as well as a philosophical tour de force."--David Sedley, The Times Literary Supplement

"Nussbaum writes as an advocate [of the Hellenistic philosophers], though not an uncritical one, for even while she admires the seriousness and subtlety with which these philosophers analyze the passions, she allows that there is an unresolvable conflict between the detachment and the intense engagement entailed by their philosophies. The sense that these philosophers still matter, that we can wrangle with them and learn from them, is invigorating."--Richard Jenkyns, The New York Times Book Review

The Epicureans, Skeptics, and Stoics practiced philosophy not as a detached intellectual discipline, but as a worldly art of grappling with issues of daily and urgent human significance: the fear of death, love and sexuality, anger and aggression. Like medicine, philosophy to them was a rigorous science aimed both at understanding and at producing the flourishing of human life. In this engaging book, Martha Nussbaum examines texts of philosophers committed to a therapeutic paradigm--including Epicurus, Lucretius, Sextus Empiricus, Chrysippus, and Seneca--and recovers a valuable source for our moral and political thought of today.

2. The Therapy of Desire

3. The Therapy of Desire

4. The Therapy of Desire

5. THE THERAPY OF DESIRE