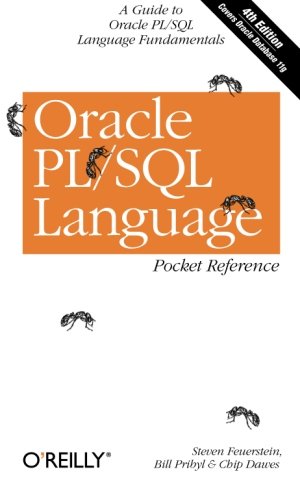 The fourth edition of this popular pocket guide provides quick-reference information that will help you use Oracle's PL/SQL language, including the newest Oracle Database 11g features. It's a companion to Steven Feuerstein and Bill Pribyl's bestselling Oracle PL/SQL Programming.

This concise guide boils down the most vital PL/SQL information into an accessible summary of:

When you need answers quickly, the Oracle PL/SQL Language Pocket Reference will save you hours of frustration.

Bill Pribyl is the primary author of "Learning Oracle PL/SQL" and the coauthor of Oracle PL/SQL Programming and its companion pocket reference, all from O'Reilly Media. He is oddly proud of having used PL/SQL to write TCP/IP networking clients, tnsping callouts, near-realtime commodity price loaders, and transcendental functions. Bill, who holds a degree in physics from Rice University, is the former editor of the IOUG technical journal (Select) and former president of the South Central Oracle Users Group. At home with his family in Houston, Texas, Bill's current nonbillable titles include Webmaster for his neighborhood civic club, "IT Guy" for his son's Boy Scout troop, and Eucharistic Adoration Coordinator for his church. Visit Bill's firm at http://www.datacraft.com.

Chip Dawes has been building and maintaining systems on relational databases since 1988 and with Oracle since 1990. He is currently a consultant with D&D Technologies, a Chicago consultancy. He enjoys working with, lecturing on, and writing about Oracle database administration, client server application development, and Unix system administration. Chip is an Oracle Certified Professional and earned computer science and aerospace engineering degrees from St. Louis University.