Artículos relacionados a The Judge's List: A Novel: 2 (The Whistler)

Grisham, John The Judge's List: A Novel: 2 (The Whistler) 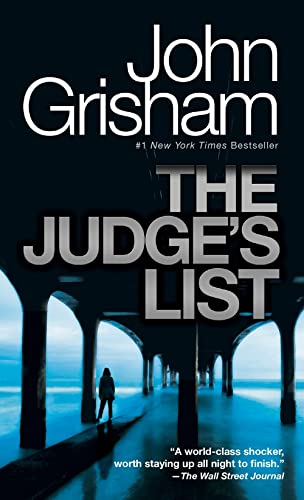 Descripción Paperback. Condición: New. International edition. Language: English. Brand new Book. #1 NEW YORK TIMES BESTSELLER Investigator Lacy Stoltz follows the trail of a serial killer, and closes in on a shocking suspect a sitting judge in "one of the best crime reads of the year. Bristling with high-tech detail and shivering with suspense. Worth staying up all night to finish" (Wall Street Journal).In The Whistler, Lacy Stoltz investigated a corrupt judge who was taking millions in bribes from a crime syndicate. She put the criminals away, but only after being attacked and nearly killed. Three years later, and approaching forty, she is tired of her work for the Florida Board on Judicial Conduct and ready for a change.Then she meets a mysterious woman who is so frightened she uses a number of aliases. Jeri Crosby s father was murdered twenty years earlier in a case that remains unsolved and that has grown stone cold. But Jeri has a suspect whom she has become obsessed with and has stalked for two decades. Along the way, she has discovered other victims.Suspicions are easy enough, but proof seems impossible. The man is brilliant, patient, and always one step ahead of law enforcement. He is the most cunning of all serial killers. He knows forensics, police procedure, and most important: he knows the law.He is a judge, in Florida under Lacy s jurisdiction.He has a list, with the names of his victims and targets, all unsuspecting people unlucky enough to have crossed his path and wronged him in some way. How can Lacy pursue him, without becoming the next name on his list?The Judge s List is by any measure John Grisham s most surprising, chilling novel yet. International Edition. Nş de ref. del artículo: AAZ9780593469064

Descripción Taschenbuch. Condición: Neu. Neuware -As an investigator for the Florida Board on Judicial Conduct, Lacy Stoltz sees plenty of corruption among the men and women elected to the bench. In THE WHISTLER, she took on a crime syndicate that was paying millions to a crooked judge. Now, in THE JUDGE'S LIST, the crimes are even worse. The man hiding behind the black robe is not taking bribes - but he may be taking lives. A new legal thriller about a man who might be the most criminal sitting judge in American history. Englisch. Nş de ref. del artículo: 9780593469064