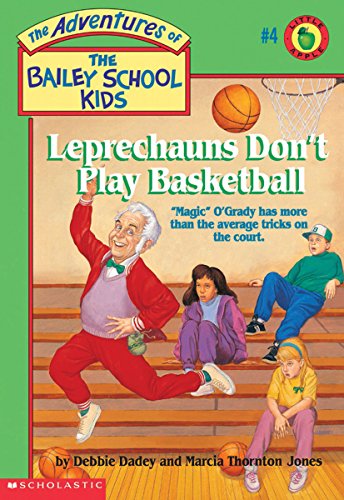 Melody is certain that her new basketball coach, Mr. O'Grady, is a leprechaun, and soon she and the other children are keeping an eye on him and observing his growing relationship with third grade teacher Mrs. Jeepers. Original.

Debbie Dadey is the bestselling co-author of THE ADVENTURES OF THE BAILEY SCHOOL KIDS series, along with writing partner Marcia Thornton Jones. Debbie has also written many books of her own, including the SWAMP MONSTER IN THIRD GRADE series and THE WORST NAME IN THIRD GRADE. She lives and writes in Fort Collins, Colorado, with her family.

Marcia Thornton Jones is co-author of the bestselling THE ADVENTURES OF THE BAILEY SCHOOL KIDS series, along with single titles like CHAMP. She has been writing for Scholastic for almost twenty years! Marcia lives and writes in Lexington, Kentucky, with her husband and their two cats.