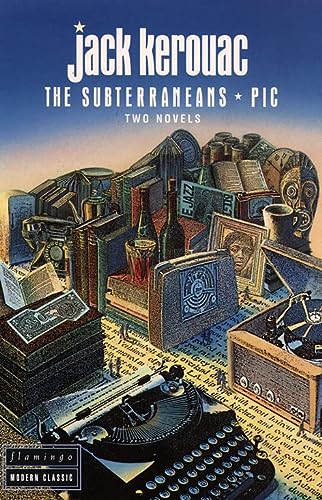 In "Subterraneans" Leo and Mardou live amongst the Subterraneans who haunt the bars and clubs of San Fransisco and have a bittersweet love affair. In "Pic", on the road but not yet overawed, ten-year-old Pic tells the story in the Negro dialect of the North Carolina farm country.

'THE SUBTERRANEANS' WITH A PREFACE BY HENRY MILLER

The Subterraneans haunt the bars and clubs of San Francisco, surviving on a diet of booze and benzedrine, Proust and Verlaine. Living amongst them is Leo, an aspiring writer, and Mardou, half-Indian, half-Negro, beautiful and neurotic. Their bitter-sweet and ill-starred love affair sees Kerouac at his most evocative.

“Some say 'The Subterraneans' is Kerouac's best novel, it's so touching and tender. The love story of Leo and Mardou, sad and sweet, furious, implacable, inevitable – many writers have since tried to imitate it and failed.”
SUNDAY TIMES

On the road but not yet overawed, ten-year-old Pic tells his story in the beautiful Negro dialect of the North Carolina farm country. Concise, original and moving, it stands as one of Kerouac's finest achievements.

“Kerouac's energy is contagious, his compassion and concern are the genuine homespun article.”
GUARDIAN

Many of Kerouac's works are available in Flamingo, including 'Big Sur, Doctor Sax' and 'Lonesome Traveler'.

Descripción Paperback. Condición: Very Good. The book has been read, but is in excellent condition. Pages are intact and not marred by notes or highlighting. The spine remains undamaged. Nş de ref. del artículo: GOR001314487

Descripción Paperback. Condición: Fair. A readable copy of the book which may include some defects such as highlighting and notes. Cover and pages may be creased and show discolouration. Nş de ref. del artículo: GOR002848465