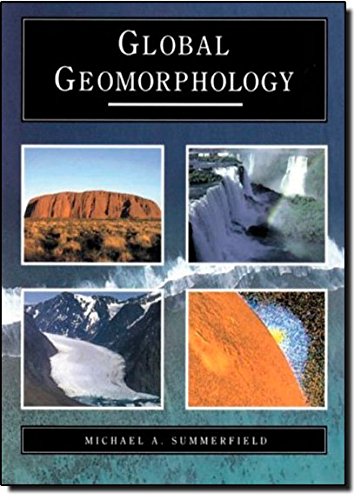 Over the past two decades geomorphology has focused on the investigation of surface processes and the way these processes create small-scale landforms. The plate tectonics revolution in the earth sciences and the advent of planetary exploration have, however, greatly broadened the potential scope of landform analysis. Although initially slow to appreciate the significance of these developments, geomorphologists are now beginning to realize that modern ideas of global tectonics can provide a valuable new framework for understanding long-term landform development. Moreover, the exploration of planetary surfaces has provided a dramatic new perspective from which to view the landscapes of our own planet.
Global Geomorphology develops an innovative approach to the study of landforms and presents the student with a comprehensive introduction which emphasizes large-scale processes and phenomena. It is the first textbook fully to integrate global tectonics into the study of landforms, and the first to incorporate planetary geomorphology as a major component. Other significant themes include the impact of climatic change and the role of rare, catastrophic events in landform genesis; the text also contains a comprehensive treatment of surface geomorphic processes. Satellite imagery is used throughout to illustrate large-scale landforms, and overall the book contains nearly 500 figures.
The book is divided into five parts. Part I introduces some fundamental concepts in geomorphology and provides a framework for the book as a whole. Part II considers landforms associated with the internally-generated processes of tectonics and volcanism, while Part III examines the wide diversity of surface processes and the landforms they create. In Part IV the relationships between internal and external processes are explored, and the book concludes with a comparative assessment of the geomorphology of planetary surfaces.

The plate tectonics revolution in the earth sciences has provided a valuable new framework for understanding long-term landform development.

This innovative text provides a comprehensive introduction to the subject of global geomorphology, with the emphasis placed on large-scale processes and phenomena. Integrating global tectonics into the study of landforms and incorporating planetary geomorphology as a major component the author discusses the impact of climatic change and the role of catastrophic events on landform genesis and includes a comprehensive study of surface geomorphic processes.