Artículos relacionados a The State of Germany: The National Idea in the Making,... 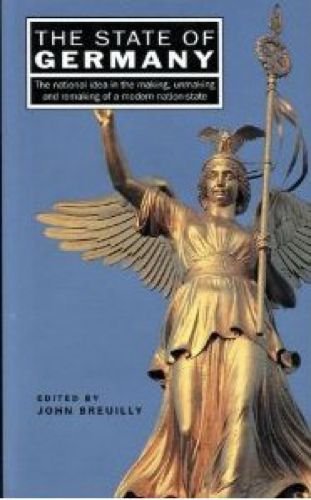 (Until 1870-71 Germany was little more than an idea. The nation-state formed in 1871 lasted less than 50 years. Hitler destroyed the republic founded in 1919 and expanded into non-German regions. Defeat in 1945 led to territorial loss and partition. In 1989 the German Democratic Republic collapsed and was absorbed into the Federal Republic of Germany a year later. What has been the role of nationalism in this history? A series of essays are deployed to approach this question. A study of the role of patriotism in the Holy Roman Empire is followed by essays on the role of the national idea in the Napoleonic period, during the revolutions of 1848, and in the unification of Germany. The national idea in the Second Empire is approached through a study of one of its leading political figures, Bernhard von Bulow. The nature of the German mission in eastern Europe is examined in an essay on German academics in the Weimar Republic and the Third Reich. There is a study of the impact Hitler had on German nationalism. For the period after 1945 essays consider the survival of nationalism in immediate post-war Germany, the extent to which different national identities were formed in a divided Germany, and how far a reunified Germany will be committed to a genuinely supra-national European identity. In his introduction the editor surveys the changing role of nationalism over this whole period and in his conclusion asks what role the national idea played in the remaking of a nation-state in 1989-90)

1. The State of Germany: The National Idea in the Making, Unmaking and Remaking of a Modern Nation-State

Descripción Longman, 1992. Hardcover. Condición: Good. Small annotations to some pages, may include notes, highlighting or underlining Good condition is defined as: a copy that has been read but remains in clean condition. All of the pages are intact and the cover is intact and the spine may show signs of wear. The book may have minor markings which are not specifically mentioned. Most items will be dispatched the same or the next working day. Nş de ref. del artículo: mon0010484852

3. The State of Germany: The National Idea in the Making, Unmaking and Remaking of a Modern Nation-State

4. The State of Germany: The National Idea in the Making, Unmaking and Remaking of a Modern Nation-State

5. The State of Germany: The National Idea in the Making, Unmaking and Remaking of a Modern Nation-State