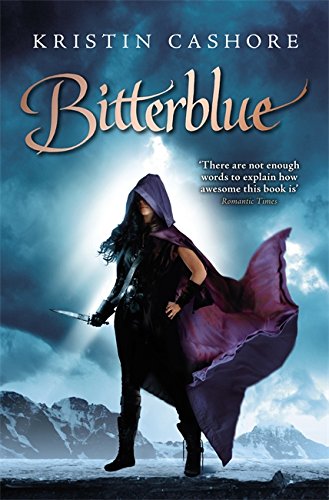 This rich and poignant fantasy grapples with the messy aftermath of destroying an evil overlord.
Gorgeous, textured prose is filled with images of strange beauty and restrained horror. It propels an intricate narrative dense with subplots and rich in characters familiar and new. Weaving them together are all the lies: conspiracies and ciphers, fakes and false testimony, spies and thieves, disguises and deceptions, mazes and puzzles.
They are lies spun from greed, shame, strategy, fear, duty - even kindness.
And it is Bitterblue who, trapped in this net of deceit, must draw upon all her courage, cleverness and ferocious compassion to reveal the truth-and to care for those it shatters.

Devastating and heartbreaking, this will be a disappointment for readers looking for a conventional happy ending. But those willing to take the risk will - like Bitterblue - achieve something even more precious: a hopeful beginning.

Eight years have passed since the young Princess Bitterblue and her country were saved from the vicious King Leck. Now Bitterblue is the queen of Monsea, and her land is at peace.

But the influence of her father, a violent psychopath with mind-altering abilities, lives on. Her advisers, who have run the country on her behalf since Leck's death, believe in a forward-thinking plan: to pardon all of those who committed terrible acts during Leck's reign; and to forget every dark event that ever happened. Monsea's past has become shrouded in mystery, and it's only when Bitterblue begins sneaking out of her castle - curious, disguised and alone - to walk the streets of her own city, that she begins to realise the truth. Her kingdom has been under the thirty-five-year long spell of a madman, and now their only chance to move forward is to revisit the past.

Whatever that past holds.

Two thieves, who have sworn only to steal what has already been stolen, change her life forever. They hold a key to the truth of Leck's reign. And one of them, who possesses an unidentified Grace, may also hold a key to her heart ...

Descripción Gollancz, 2012. Hardcover. Condición: Very Good. Bitterblue (Seven Kingdoms Trilogy 3) This book is in very good condition and will be shipped within 24 hours of ordering. The cover may have some limited signs of wear but the pages are clean, intact and the spine remains undamaged. This book has clearly been well maintained and looked after thus far. Money back guarantee if you are not satisfied. See all our books here, order more than 1 book and get discounted shipping. . Nş de ref. del artículo: 7719-9780575097179

Descripción Paperback. Condición: Very Good. The book has been read, but is in excellent condition. Pages are intact and not marred by notes or highlighting. The spine remains undamaged. Nş de ref. del artículo: GOR003773993