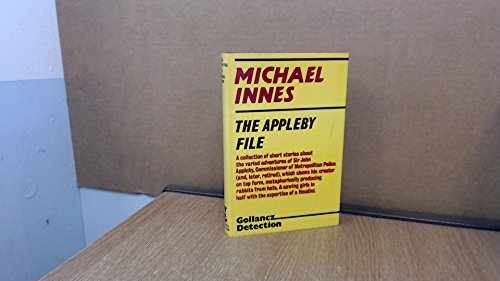 Born in Edinburgh in 1906, the son of the city's Director of Education, John Innes Mackintosh Stewart wrote a highly successful series of mystery stories under the pseudonym Michael Innes. Innes was educated at Oriel College, Oxford, where he was presented with the Matthew Arnold Memorial Prize and named a Bishop Frazer's scholar. After graduation he went to Vienna, to study Freudian psychoanalysis for a year and following his first book, an edition of Florio's translation of Montaigne, was offered a lectureship at the University of Leeds. In 1932 he married Margaret Hardwick, a doctor, and they subsequently had five children including Angus, also a novelist. The year 1936 saw Innes as Professor of English at the University of Adelaide, during which tenure he wrote his first mystery story, 'Death at the President's Lodging'. With his second, 'Hamlet Revenge', Innes firmly established his reputation as a highly entertaining and cultivated writer. After the end of World War II, Innes returned to the UK and spent two years at Queen's University, Belfast where in 1949 he wrote the 'Journeying Boy', a novel notable for the richly comedic use of an Irish setting. He then settled down as a Reader in English Literature at Christ Church, Oxford, from which he retired in 1973. His most famous character is 'John Appleby', who inspired a penchant for donnish detective fiction that lasts to this day. Innes's other well-known character is 'Honeybath', the painter and rather reluctant detective, who first appeared in 1975 in 'The Mysterious Commission'. The last novel, 'Appleby and the Ospreys', was published in 1986, some eight years before his death in 1994. 'A master - he constructs a plot that twists and turns like an electric eel: it gives you shock upon shock and you cannot let go.' - Times Literary Supplement.

There are fifteen stories in this compelling collection, including: Poltergeist - when Appleby's wife tells him that her aunt is experiencing trouble with a Poltergeist, he is amused but dismissive, until he discovers that several priceless artefacts have been smashed as a result; A Question of Confidence - when Bobby Appleby's friend, Brian Button, is caught up in a scandalous murder in Oxford, Bobby's famous detective father is their first port of call; The Ascham - an abandoned car on a narrow lane intrigues Appleby and his wife, but even more intriguing is the medieval castle they stumble upon.

Descripci¾n Victor Gollancz Ltd., 1975. Hardback. Condici¾n: Fair. A readable copy of the book which may include some defects such as highlighting and notes. Cover and pages may be creased and show discolouration. N║ de ref. del artĒculo: GOR004930843

Descripci¾n Victor Gollancz Ltd., 1975. Hardback. Condici¾n: Good. The book has been read but remains in clean condition. All pages are intact and the cover is intact. Some minor wear to the spine. N║ de ref. del artĒculo: GOR003577645

Descripci¾n Gollancz, London, 1975. Hard Cover. Condici¾n: Very Good. Estado de la sobrecubierta: Very Good. First British Edition. 207 pp, 8vo (8" H). "(A) brilliant collection of Michael Innes short stories about the varied adventures of his great detective, Sir John Appleby, Commissioner of Metropolitan Police (and, later, retired). Appleby has to cope with many diabolically ingenious modes of crime: a faked poltergeist; an exploding antique; a balloon to remove a weapon; an arrow to obliterate a trail. Many of the clues that lead to solutions are equally remarkable: a shubunkin in a pocket; the overpainting of a portrait; photocopies that have stuck together; a broken wine-glass; a coat worn inside-out; a London taxi-cab on the Simplon Pass. And the plots involve elaborate double bluffs: suicides designed to look like murders; X disguised as Y disguised as X; and in 'The Memorial Service' the tangle of impersonation develops into a triple - or is it a quadruple? - bluff." Contents: The Appleby File: The Ascham; Poltergeist; The Fishermen; The Conversation Piece; Death By Water; A Question of Confidence; The Memorial Service. Appleby's Holidays: Two on a Tower; Beggar With Skull; The Exploding Battleship; The Body in the Glen; Death in the Sun; Cold Blood; The Coy Mistress; The Thirteenth Priest Hole. Minor wrinkling at bottom of spine, tiny bump at top corner of boards, a few tiny foxing marks on edges of text block very small faint mark on free front endpaper. Dust jacket has two faint line indentations and tiny dint on front panel, light wrinkling at top of flap-folds. N║ de ref. del artĒculo: 27376