Artículos relacionados a Choir Rocks! If I Ain't Got You

Choir Rocks! If I Ain't Got You

Choir Rocks! If I Ain't Got You 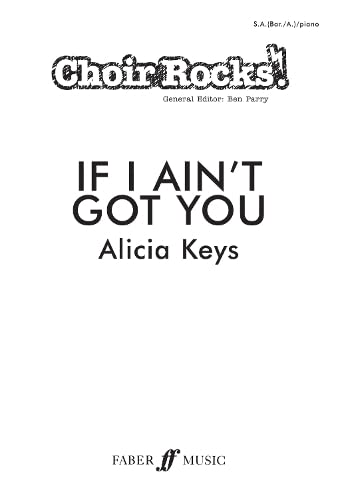 Adding to Ben Parry's already excellent arrangements in this series are some new arrangements. Billy Joel's appealing She's Always a Women is simple but effective and the two Alicia Keys arrangements, Empire State of Mind and If I Ain't Got You, give each of these three voices the tune at times and make effective use of triads in close position....The arrangements reflect Ben Parry's vast experience as a conductor, singer, composer and arranger, working with groups from The Swingle Singers to London Voices....The accompaniments are beautifully written, straightforward yet imaginative. Music Teacher Magazine Products and Reviews Supplement 2012 I tried out Ben Parry's arrangement of Take That's Greatest Day with my school's chapel choir as part of some light-hearted warm-ups and they loved it, as did adult singers from my choral society. This is music that is unashamedly fun to sing....... This set of arrangements reflects Ben Parry's vast experience as a conductor, singer, composer and arranger, working with groups ranging from the Swingle Singers to London Voices. I imagine the most potential users will dip into this set of arrangements, choosing some songs which might be already familiar, such as Freddie Mercury's hypnotic Someone to Love or Duffy's Mercy, which makes effective use of close position triads in a gospel style. The editorial notes state that `All pieces are written for soprano and alto, with an optional third part of limited range for baritone or low alto.' The arrangements will be ideal for choirs with a plethora of high voices, but will certainly benefit from the richness added by the third part...I really enjoyed playing through all the accompaniments, in which every note counts. They are indeed `straightforward yet imaginative'. Music Teacher Magazine, January 2011 ...specially arranged for high voice (or SAB) choirs, adding to the popular choir culture in the UK. Expect many more from this keenly priced (and bound to be keenly hunted) series. MiPro Magazine, January 2011

Choir Rocks! If I Ain't Got You is Alicia Keys' hit single from the album The Diary of Alicia Keys, arranged for upper voices with piano accompaniment by Ben Parry. Choir Rocks! Series offers flexible arrangements of contemporary pop hits. All pieces are written for soprano and alto, with an optional third part of limited range for baritone or low alto with straightforward piano accompaniments perfect for the amateur pianist. Also includes chord symbols for the addition of guitar, bass, and drums for a more electric performance.