Artículos relacionados a The Ninth: Beethoven and the World in 1824

Sachs, Harvey The Ninth: Beethoven and the World in 1824

The Ninth: Beethoven and the World in 1824 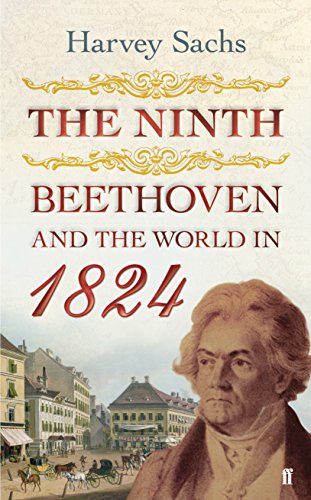 "This book is a great read for expert musicians and for people who can't read a note of music. It is a very personal, loving view of Beethoven and his last symphony, but it also presents a fascinating historic panorama." - Placido Domingo"Harvey Sachs brings to the fabled Ninth Symphony the broadest range yet of cultural and artistic testimony about Beethoven and about art." - Scott Burnham, Professor of Music History, Princeton University and author of "Beethoven Hero""Harvey Sachs has written excellent books about music and musicians. Here he turns his--and our--attention to one of the great monuments of music. We think we know this symphony quite well. How wrong we are! This book will help us to understand it better." --Andras Schiff"Harvey Sachs is a superb writer, a fine musical mind, scholar, and an astute cultural historian. His new book on Beethoven's Ninth, written within the world of 1824, is a dazzling display of erudition--and high entertainment!" --David Dubal, professor, The Julliard School, and author of "Evenings with Horowitz"

A decade after the French Revolutionary and Napoleonic Wars had given way to an era of retrenchment and repression, 1824 became a watershed year. The premiere of the Ninth Symphony, the death of Lord Byron - who had been aiding the Greeks in their struggle for independence, Delacroix's painting of the Turkish massacre of Greeks at Chios and Pushkin's anti-tyrannical play Boris Godunov all signalled that the desire for freedom was not dead. And all of these works and events were part of the flowering of the High Romantic period.

In The Ninth, eminent music historian and biographer Harvey Sachs employs memoir, anecdote and his vast knowledge of history to explain how the premiere of Beethoven's staggering last symphony was emblematic of its time - a work of art unlike any other - and a magisterial, humanistic statement that remains a challenge down to our own day and for future generations.