Artículos relacionados a Expositions and Developments 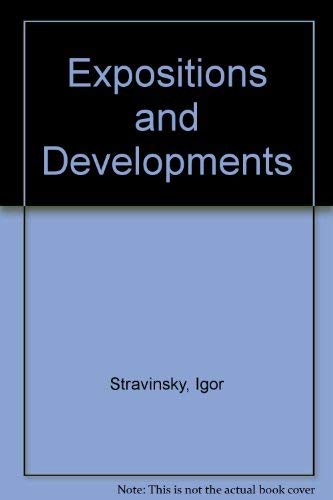 The conversations between Igor Stravinsky and Robert Craft are unique in musical history.' Sunday Times Expositions and Developments is the third in the legendary series of Stravinsky's conversations with Robert Craft. In this volume Stravinsky delves deep into his memory and brings to light, in the most absorbing detail, reminiscences of his childhood, youth and early manhood in Russia. A most remarkable evocation of St Petersburg, the city that the composer still loves best, forms part of the earlier, 'expository' section of the book. In his 'developments', Stravinsky moves outside Russia and unfolds a wealth of information and racy anecdote, most of which has a direct bearing on his music. The extensive chronological sweep of these conversations embraces not only a vivid account of how the Rite of Spring was composed and first performed but also his first thoughts about The Flood, one of his most recent works. This unique series of memories offers not only indispensable documentation but also exceptional literary distinction, and is essential reading for all students and lovers of Stravinsky.

Descripción Paperback. Condición: Very Good. The book has been read, but is in excellent condition. Pages are intact and not marred by notes or highlighting. The spine remains undamaged. Nş de ref. del artículo: GOR001719623

Descripción Faber & Faber 1981-10-01, 1981. Paperback. Condición: Very Good. Item is in very good condition. If supplemental codes/CDs for textbooks are required please contact us prior to purchasing as they may be missing. Photos are stock pictures and not of the actual item. Nş de ref. del artículo: DS-0571100341-2