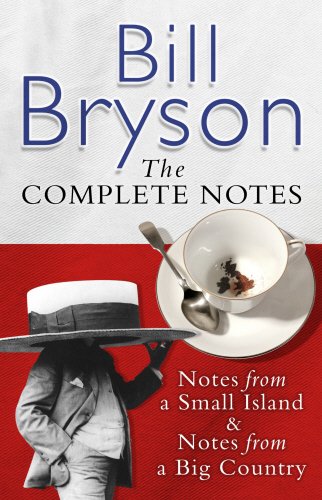 Críticas:
"[Notes from a Small Island]What's enjoyable is that there's as much of Bryson in here as there is of Britain" (Sunday Telegraph)

"[Notes from a Big Country] Bill Bryson's answer to Alastair Cooke's Letter from America...not only hilarious but also insightful and informative." (Independent on Sunday)

"[Small Island] Not a book that should be read in public, for fear of emitting loud snorts." (The Times)

"[Big Country] Delightful bite-size essays that exude affection while debunking the ridiculous with wonderful succinctness." (The Times)
Reseńa del editor:
After nearly two decades in Britain, when Bryson took the decision to move Mrs Bryson, little Jimmy et al. back to the States, he made one last valedictory tour around old Blighty, resulting in Notes from a Small Island, a heartfelt eulogy to the country that produced Marmite, milky tea, Gardeners' Question Time and people who say, 'Mustn't grumble'.

And while residing in New England to give his family a taste of the American way of life, he wrote the columns that became Notes from a Big Country, revealing the strange appeal of breakfast pizza, the jaw-slackening direness of US TV, and the answer to the puzzle of why nobody in America ever walks anywhere.. NOTA: El libro no está en espańol, sino en inglés.