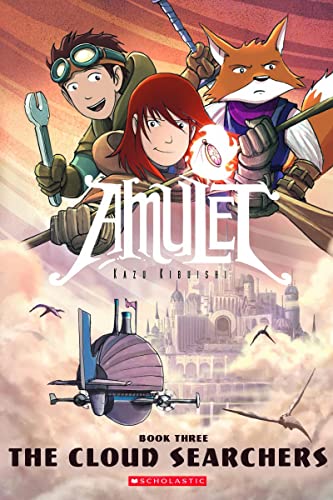 Kazu Kibuishi's #1 New York Times-bestselling graphic novel series continues! Emily, Navin, and their crew of resistance fighters charter an airship and set off in search of the lost city of Cielis. There they hope to find help from the Guardian Council's powerful Stonekeepers. It's a mission that Alledia's survival depends on, and time is running out. Emily's got to find Cielis before the Elf King finds her.

In the third installment of the thrilling Amulet series, Emily, Navin, and their crew of resistance fighters charter an airship and set off in search of the lost city of Cielis, which is believed to be located on an island high above the clouds. The mysterious Leon Redbeard is their guide, and there's a surprising new addition to the crew: the Elf King's son, Trellis. But is he ally or enemy? And will Emily ever be able to trust the voice of the Amulet?

Kazu Kibuishi is the founder and editor of the critically acclaimed Flight anthologies, as well as the creator of COPPER. He lives in Alhambra, California, with his wife and fellow comics artist, Amy Kim Kibuishi, and their son. Visit him online at www.boltcity.com.

8. The Cloud Searchers (Paperback or Softback)