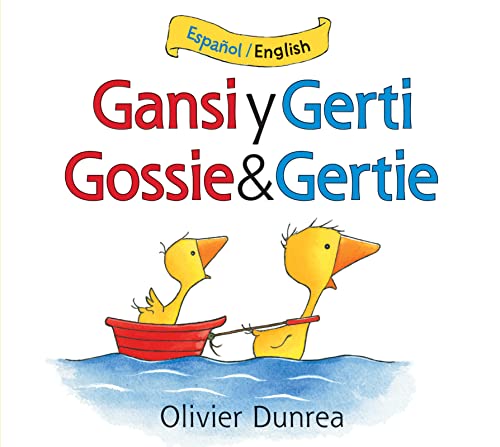 "Two books that are sure to become favorites... Young children will ask to hear these stories again and again, and they're just right for little hands." School Library Journal, Starred "The potent combination of toddler-appealing story lines and the charismatic charm of the illustrations assure that these smartly clad geese will be marching straight into the hearts of readers." Kirkus Reviews Gossie and Gertie's boots are made for walking; the books they so delightfully traverse are made for treasuring.
Horn Book, Starred "Preschoolers are bound to ask for an encore reading, and they'll probably ask for new boots, too." The Bulletin of the Center for Children's Books Reseńa del editor:

Gossie and Gertie are best friends and everywhere Gossie goes, Gertie goes too--except when she doesn't, and sometimes that's even better.

2. Gansi Y Gerti/Gossie and Gertie Bilingual Board Book (Board book)

Descripción Board Books. Condición: New. Board Books. Shipping may be from multiple locations in the US or from the UK, depending on stock availability. 32 pages. 0.181. Nş de ref. del artículo: 9780544077737

4. Gansi Y Gerti/Gossie and Gertie Bilingual Board Book (Board book)

5. Gansi Y Gerti/Gossie and Gertie Bilingual Board Book (Board book)