Artículos relacionados a Atlas of the Messier Objects Hardback: Highlights of...

Atlas of the Messier Objects Hardback: Highlights of the Deep Sky 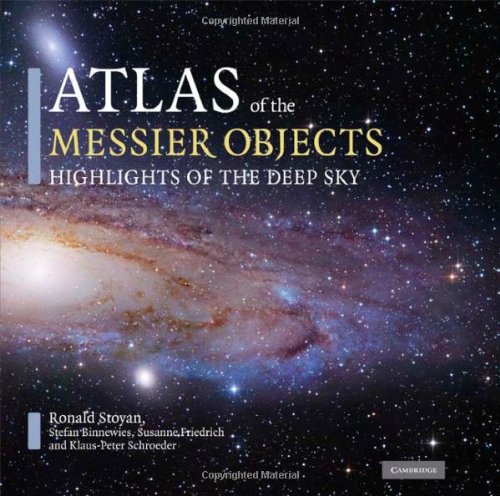 This stunning atlas presents a complete account of each of the 110 Messier objects, with information on their history, astrophysical significance, and detailed observational descriptions. Illustrated with the finest color astrophotos, historical sketches and deep sky drawings - this is a must-have reference for observers of all ages and abilities!

'I received your book and must say that it is absolutely beautiful! You have created an amazing review of the Messier objects. Congratulations on a breathtaking publication!' Philip S. Harrington, author of Star Ware and Touring the Universe through Binoculars

'Ronald Stoyan's Atlas of the Messier Objects should be required reading for amateur astronomers. Its impressive content, textually and visually, makes it a definitive work on the catalog and its objects. Extensive discussions of the catalog's formulation, history, and meaning precede a stunning gallery of all the objects along with nearly exhaustive historical, astrophysical, and observational discussions for each object. Numerous high-quality photographs and eyepiece drawings accompany the text. This book should be on the shelf of every observer, and deserves wide distribution in the United States market.' David Eicher, Editor-in-Chief, Astronomy

'Atlas of the Messier Objects is more comprehensive, detailed, and beautiful than any other book showcasing the objects cataloged by Charles Messier. The art of observing is practiced as much with the mind as with the eye, and this book gathers into one volume diverse aspects that both enrich the experience and serve as a valuable reference. No other book does such a masterful job of gathering all that is fascinating about the Messier objects and weaving it into a book that is both so enlightening and handsome.' Susan French, author of Celestial Sampler: 60 Small-scope Tours for Starlit Nights

'Everything a book should be. Beautifully published on excellent paper and very comprehensive. Certainly the most comprehensive book on the Messier objects that has been written to date.' Stewart Moore, Director, Deep Sky section, British Astronomical Association

'Not another book about Messier's catalog' you might think. This would be completely wrong as you have never seen one like this. Simply put, this is EXTREMELY complete! Why have you never seen a book like this? Well, imagine the result merging books such as The Messier Album from Mallas & Kreimer, The Messier Objects by O'Meara, Messier's Nebulae and Star Clusters by Glyn Jones. 'A glorious chaotic mess' would you argue? Certainly not. The authors have put all this together in good shape, with a very clear presentation in order to produce an innovative book, easy to read or just to browse.' Yann Pothier, Editor of French Deep Sky Observer's magazine Ciel Extreme

'There are several good books that cover Charles Messier's famous catalogue of Deep Sky objects, but none are as beautiful or comprehensive as this spectacular volume ...There is a very fine biography of the 'ferret of comets' himself which not only brings the man to life, but also places him in context of the turbulent times in which he lived ... Ronald Stoyan and his colleagues are to be congratulated for putting together a most beautiful and helpful volume on Messier and his catalogue, one that all Deep Sky enthusiasts will wish to own, and which is unlikely to be surpassed for many years.' Nick Hewitt, Journal of the British Astronomical Association

'... amazingly comprehensive. ... The full-plate photographs are truly magnificent. ... also excellent drawings ... this book is worth every penny - and more. There have been many Messier books, but in my view this is the best I have ever seen.' Sky at Night Magazine

'It would probably be worth buying the book just for the pictures alone but there is so much great stuff packed in that this masterful volume is a must for any astronomer.' Astronomy Now

'This is a wonderfully illustrated and extremely comprehensive review of the 110 star clusters, nebulae and galaxies included in the Messier catalogue. ... The authors present a breathtaking overview and graphic representation of the deep sky features that make up our Galaxy with spectacular images on a large scale. ... This is really a stunning gallery of the Messier objects and [a] very valuable reference work. There [has] clearly [been] a huge amount of thought and research gone into the creation of this book and I would highly recommend it.' Dr Billy O'Keefe, Member of Astronomy Ireland

'The images illustrating the objects are some of the best I have seen. This book could easily have become a collection of 'eye candy' if the accompanying text had not been so well written and organized. The most obvious illustrations are the astrophotos that dominate each entry. A few of these are from the Hubble Space Telescope or professional observatories, but the overwhelming majority have been taken by amateur astronomers, making the book a showcase for the work of astro imagers. Some of these images are also reproduced in an inverted (black and white) format to better illustrate certain structures and features of their subjects. Double and variable stars in clusters, as well as other objects likely to be found in the field of view, are labeled for easy location by observers. Where these are numerous, a table lists them for easy reference. In addition to these stunningly beautiful illustrations are sketches made by the principle author at the eyepiece of a 14'' reflector, and these illustrations give the reader a clear idea of the differences between images and the eyepiece experience. Illustration of the book goes a step farther by reproducing many sketches made during historic observations by the likes of Lord Rosse and John Herschel. ... It's a visual treat into the bargain, adding a dimension of sheer enjoyment usually lacking in such books. Atlas of the Messier Objects has quickly become an important reference that effectively supplements the existing material in my Messier library. It is, indeed, worthy of a place on the over-burdened bookshelf.' Cloudy Nights Telescope Reviews

Ronald Stoyan is editor-in-chief of Interstellarum, one of Germany's main astronomy magazines. He was the founding director of the German deep sky organization 'Fachgruppe Deep-Sky', and has authored and coauthored six books on practical astronomy.

1. Atlas of the Messier Objects: Highlights of the Deep Sky